The Fokker Dr.I (Dreidecker, “triplane” in German), often known simply as the Fokker Triplane, was a World War I fighter aircraft built by Fokker-Flugzeugwerke. The Dr.I saw widespread service in the spring of 1918. It became famous as the aircraft in which Manfred von Richthofen gained his last 19 victories, and in which he was […]

The North American F-100 Super Sabre is an American supersonic jet fighter aircraft that served with the United States Air Force (USAF) from 1954 to 1971 and with the Air National Guard (ANG) until 1979. The first of the Century Series of USAF jet fighters, it was the first USAF fighter capable of supersonic speed […]

The General Dynamics–Grumman EF-111A Raven is an electronic-warfare aircraft designed to replace the B-66 Destroyer in the United States Air Force. Its crews and maintainers often called it the “Spark-Vark”, a play on the F-111’s “Aardvark” nickname. The USAF contracted with Grumman in 1974 to convert some existing General Dynamics F-111As into electronic warfare/electronic countermeasures […]

The Dassault/Dornier Alpha Jet is a light attack jet and advanced jet trainer co-manufactured by Dassault Aviation of France and Dornier Flugzeugwerke of Germany. It was developed specifically to perform the trainer and light attack missions, as well as to perform these duties more ideally than the first generation of jet trainers that preceded it. […] 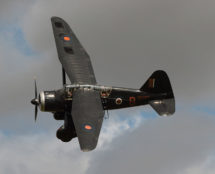 The Dassault Mirage 2000 is a French multirole, single-engine fourth-generation jet fighter manufactured by Dassault Aviation. It was designed in the late 1970s as a lightweight fighter to replace the Mirage III for the French Air Force (Armée de l’Air). The Mirage 2000 evolved into a multirole aircraft with several variants developed, with sales to […]

The Macchi C.205 (also known as MC.205, “MC” standing for “Macchi Castoldi”) Veltro (Italian: Greyhound) was an Italian World War II fighter aircraft built by the Aeronautica Macchi. Along with the Reggiane Re.2005 and Fiat G.55, the Macchi C.205 was one of the three “Serie 5” Italian fighters built around the powerful Daimler-Benz DB 605 […] 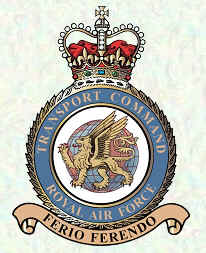 The Short Tucano is a two-seat turboprop basic trainer built by Short Brothers in Belfast, Northern Ireland. It is a licence-built version of the Brazilian Embraer EMB-312 Tucano. The main operator is the Royal Air Force with exports to Kenya and Kuwait The Embraer EMB 312 Tucano is a low-wing, tandem-seat, single-turboprop, basic trainer with […]

The Sukhoi Su-25 Grach : NATO reporting name: Frogfoot) is a single-seat, twin-engine jet aircraft developed in the Soviet Union by Sukhoi. It was designed to provide close air support for the Soviet Ground Forces. The first prototype made its maiden flight on 22nd February 1975. After testing, the aircraft went into series production in […]

Werner Schröer (12th February 1918 – 10th February 1985) was a German World War II fighter ace who served in the Luftwaffe from 1937, initially as a member of the ground staff, until the end of World War II in Europe on 8th May 1945, by which time he had reached the highest ranks of […] 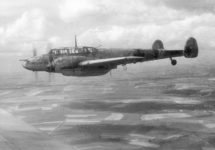 The Messerschmitt Bf 110, often known non-officially as the Me 110, was a twin-engine heavy fighter (Zerstörer—German for “Destroyer”) and fighter-bomber (Jagdbomber or Jabo) developed in Nazi Germany in the 1930s and used by the Luftwaffe and others during World War II. Hermann Göring was a proponent of the Bf 110. It was armed with […] 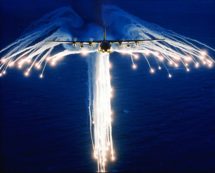 The Northrop (later Northrop Grumman) B-2 Spirit, also known as the Stealth Bomber, is an American heavy penetration strategic bomber, featuring low observable stealth technology designed for penetrating dense anti-aircraft defenses; it is a flying wing design with a crew of two. The bomber can deploy both conventional and thermonuclear weapons, such as eighty 500 lb […]

The Vought F-8 Crusader (originally F8U) was a single-engine, supersonic, carrier-based air superiority jet aircraft built by Vought for the United States Navy and Marine Corps, replacing the Vought F7U Cutlass, and for the French Navy. The first F-8 prototype was ready for flight in February 1955. The F-8 served principally in the Vietnam War. […]