The Curtiss SB2C Helldiver was a carrier-based dive bomber aircraft produced for the United States Navy during World War II. It replaced the Douglas SBD Dauntless in US Navy service. The SB2C was much faster than the SBD it replaced. Crew nicknames for the aircraft included the Big-Tailed Beast (or just the derogatory Beast), Two-Cee […]

The Northrop (later Northrop Grumman) B-2 Spirit, also known as the Stealth Bomber, is an American heavy penetration strategic bomber, featuring low observable stealth technology designed for penetrating dense anti-aircraft defenses; it is a flying wing design with a crew of two. The bomber can deploy both conventional and thermonuclear weapons, such as eighty 500 lb […] 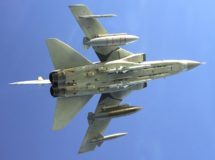 The Panavia Tornado Air Defence Variant (ADV) was a long-range, twin-engine interceptor version of the swing-wing Panavia Tornado. The aircraft’s first flight was on 27th October 1979, and it entered service with the Royal Air Force (RAF) in 1986. It was also previously operated by the Italian Air Force (AMI) and the Royal Saudi Air […]