Werner Schröer (12th February 1918 – 10th February 1985) was a German World War II fighter ace who served in the Luftwaffe from 1937, initially as a member of the ground staff, until the end of World War II in Europe on 8th May 1945, by which time he had reached the highest ranks of […] 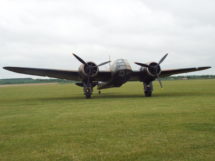 The Bristol Blenheim is a British light bomber aircraft designed and built by the Bristol Aeroplane Company that was used extensively in the first two years of the Second World War. It was adapted as an interim long-range and night fighter, pending the availability of the Beaufighter. It was one of the first British aircraft […]

All the new models are available at Flying Tigers, including the new Hobbymaster F-35 Lightning II and the Avro Anson from Oxford.