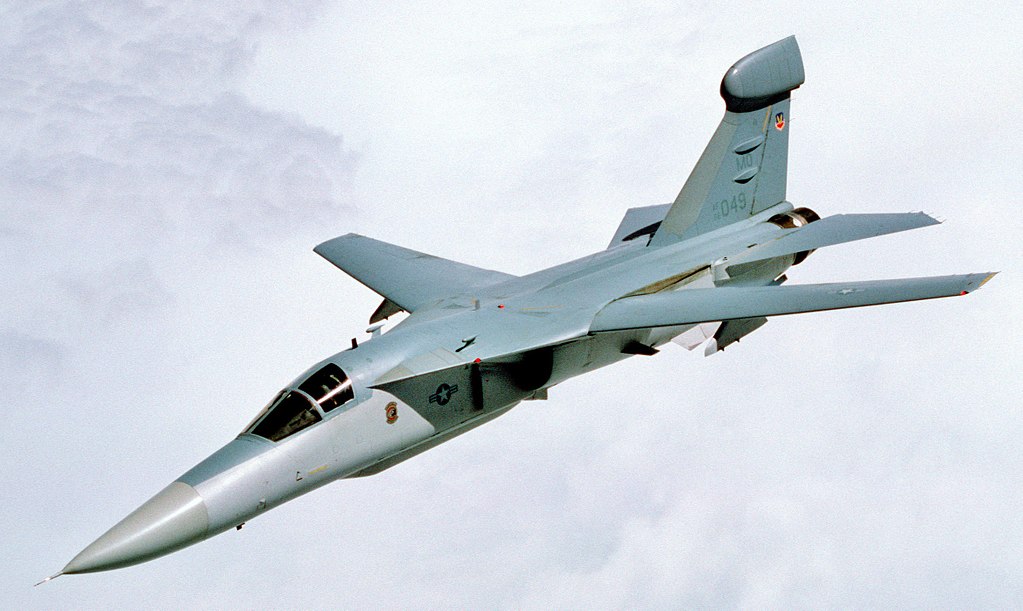 The General Dynamics–Grumman EF-111A Raven is an electronic-warfare aircraft designed to replace the B-66 Destroyer in the United States Air Force. Its crews and maintainers often called it the “Spark-Vark”, a play on the F-111’s “Aardvark” nickname.

The USAF contracted with Grumman in 1974 to convert some existing General Dynamics F-111As into electronic warfare/electronic countermeasures (ECM) aircraft. The USAF had considered the Navy / Marine Corps Grumman EA-6B Prowler, but desired a penetrating aircraft with supersonic speed.

The EF-111 entered service in 1983 and served until its retirement in 1998. Afterwards, the Air Force began depending on Navy and Marine Corps EA-6Bs for electronic warfare support. 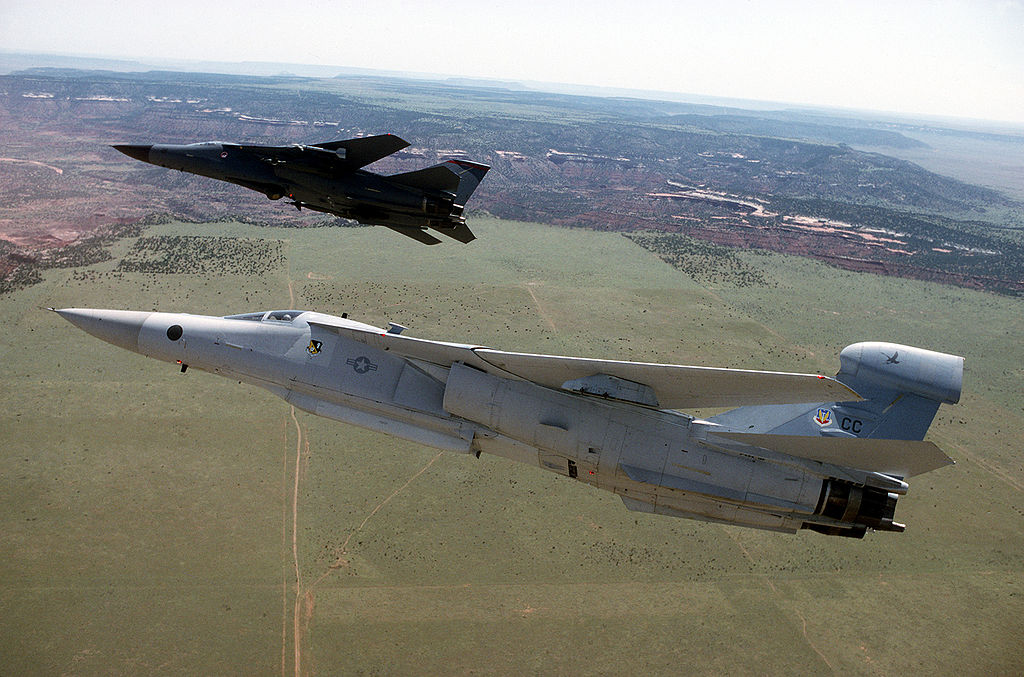 An EF-111A Raven in the foreground with a tail-mounted receiving pod and an underside-mounted transmitting pod, accompanied by an F-111F

In January 1974, the Air Force awarded electronic warfare study contracts to Grumman and General Dynamics.  Grumman was selected as the EF-111 prime contractor in December 1974, then was awarded a contract to modify two F-111As into EF-111 prototypes in January 1975. The first fully equipped model, known then as the “Electric Fox”, flew on 10th March 1977. A total of 42 airframes were converted at a total cost of US$1.5 billion. The first EF-111s were deployed in November 1981 to the 388th Tactical Electronic Squadron, Mountain Home AFB, Idaho. The last was delivered in 1985.

The Raven retained the F-111A’s navigation systems, with a revised AN/APQ-160 radar primarily for ground mapping. The primary feature of the Raven, however, was the AN/ALQ-99E jamming system, developed from the Navy’s ALQ-99 on the Prowler. The aircraft also utilized the ALR-62 Countermeasures Receiving System (CRS) as a Radar Homing and Warning (RHAW) System, the same system carried by all F-111 fighter/bomber models in the United States and Australia. The ALQ-99E primary electronics were installed in the weapons bay, with transmitters fitted in a 16 feet (4.9 m) long ventral “canoe” radome; the complete installation weighed some 6,000 pounds (2,700 kg). Receivers were installed in a fin-tip pod, or “football”, similar to that of the EA-6B. The aircraft’s electrical and cooling systems had to be extensively upgraded to support this equipment. The cockpit was also rearranged, with all flight and navigation displays relocated to the pilot’s side, and flight controls except throttles being removed from the other seat, where the electronic warfare officer’s instrumentation and controls were installed. 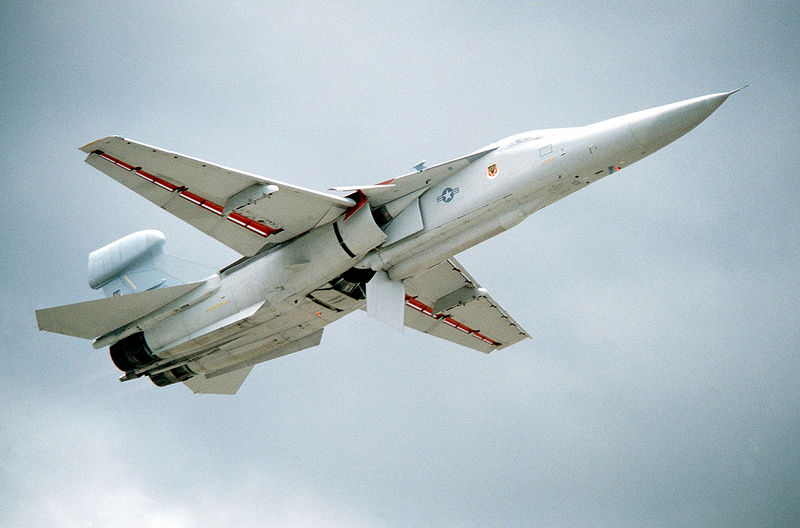 The EF-111 was unarmed. Its speed and acceleration were its main means of self-defense. It was not capable of firing anti-radiation missiles in the Suppression of Enemy Air Defenses (SEAD) role, which was a tactical limitation. The Raven’s engines were upgraded to the more powerful TF30-P-9 of the D-model, with 12,000 pounds-force (53 kN) dry and 19,600 lbf (87 kN) afterburning thrust in 1986. From 1987 to 1994 the “Spark ‘Vark” underwent an Avionics Modernization Program (AMP), similar to the Pacer Strike program for the F-model. This added a dual AN/ASN-41 ring laser gyroscope INS, AN/APN-218 Doppler radar, and an updated AN/APQ-146 terrain-following radar. Cockpit displays were upgraded with multi-function displays.

The EF-111A achieved initial operational capability in 1983. The EF-111A received the official popular name Raven, although in service it acquired the nickname “Spark ‘Vark”. EF-111s first saw combat use with the 20th Tactical Fighter Wing at RAF Upper Heyford during Operation El Dorado Canyon against Libya in 1986, and Operation Just Cause in Panama during late 1989.

The Raven served in the Gulf War during Operation Desert Storm in 1991. On 17th January 1991, a USAF EF-111 crew of Captain James Denton and Captain Brent Brandon achieved an unofficial kill against an Iraqi Dassault Mirage F1, which they managed to maneuver into the ground, making it the only member of the F-111/FB-111/EF-111 family to achieve an aerial victory over another aircraft. However, a recent article has cast doubt on this as the only Iraqi Mirage F1 in the air that night returned safely to base and its pilot reported that he shot down the EF-111. 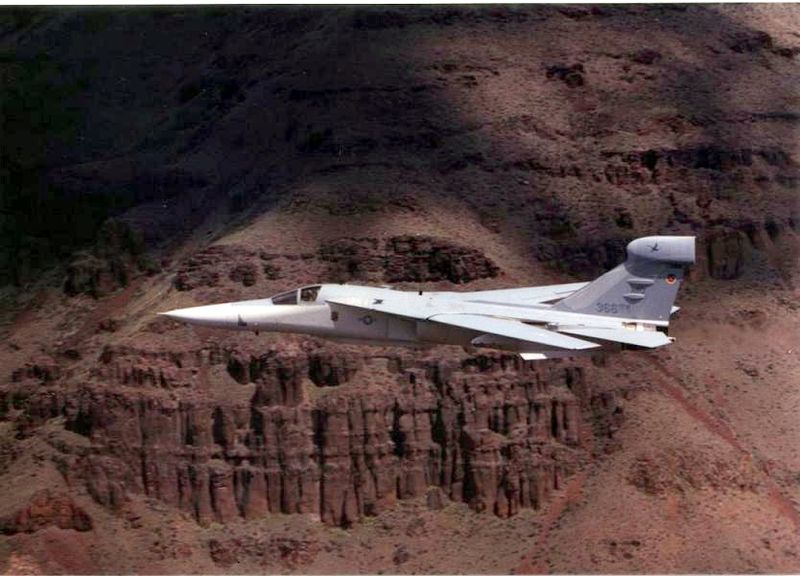 No Coalition aircraft were lost to a radar-guided missile during Desert Storm while an EF-111 Raven was on station.

On 13th February 1991, EF-111A, AF Ser. No. 66-0023, call sign Ratchet 75, crashed into terrain while maneuvering to evade a missile fired by an enemy Mirage F1 fighter killing the pilot, Capt Douglas L. Bradt, and the EWO, Capt Paul R. Eichenlaub. It was the only EF-111A lost during combat, the only loss killing its crew, and one of just three EF-111s lost in its history. 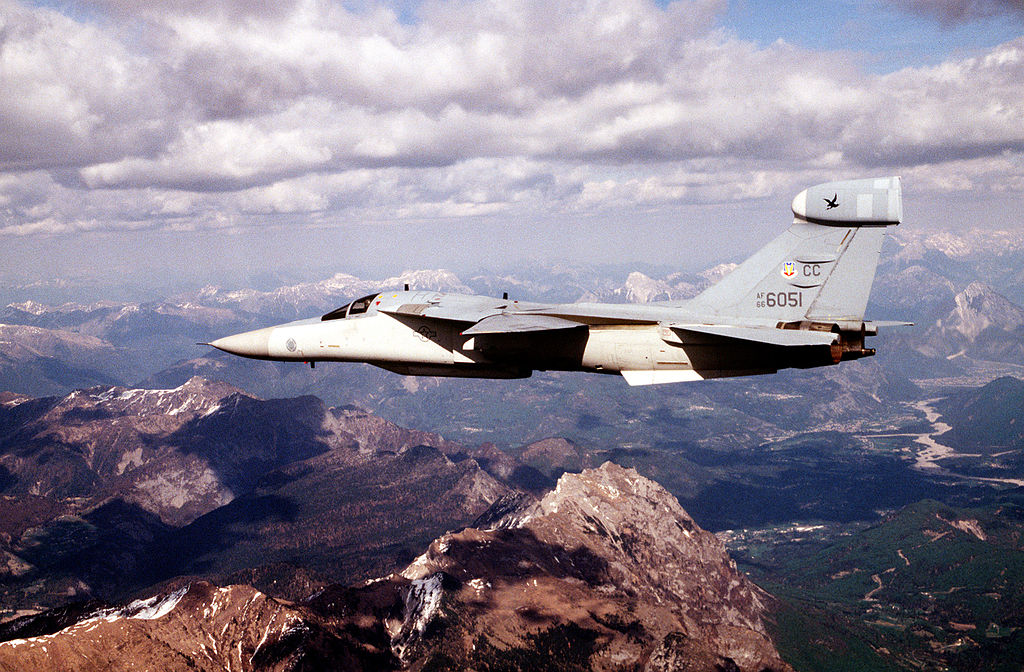 An EF-111 flies over the Alps during Operation Deny Flight

EF-111s were deployed to Aviano Air Base, Italy in support of Operation Deliberate Force during the mid-1990s. The Raven also flew missions in Operation Provide Comfort, Operation Northern Watch and Operation Southern Watch.

The last deployment of the Raven was a detachment of EF-111s stationed at Al Kharj/Prince Sultan Air Base in Saudi Arabia until April 1998. Shortly afterward, the USAF began withdrawing the final EF-111As from service, and placed them in storage at the Aerospace Maintenance and Regeneration Center (AMARC) at Davis-Monthan AFB, Arizona. The last EF-111s were retired on 2 May 1998, at Cannon AFB, New Mexico. These were the final USAF F-111s in service.

Of the 42 converted aircraft, 3 were destroyed in crashes, 4 are on display, and the rest were scrapped. 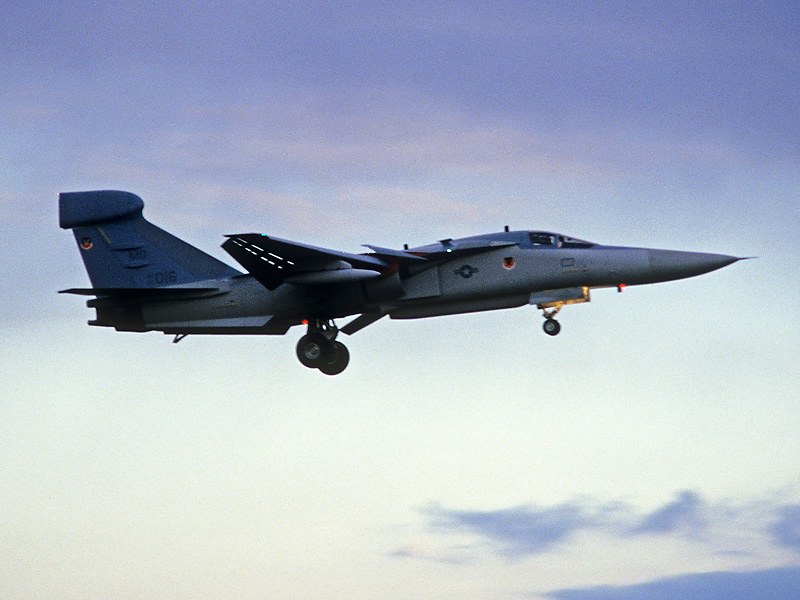 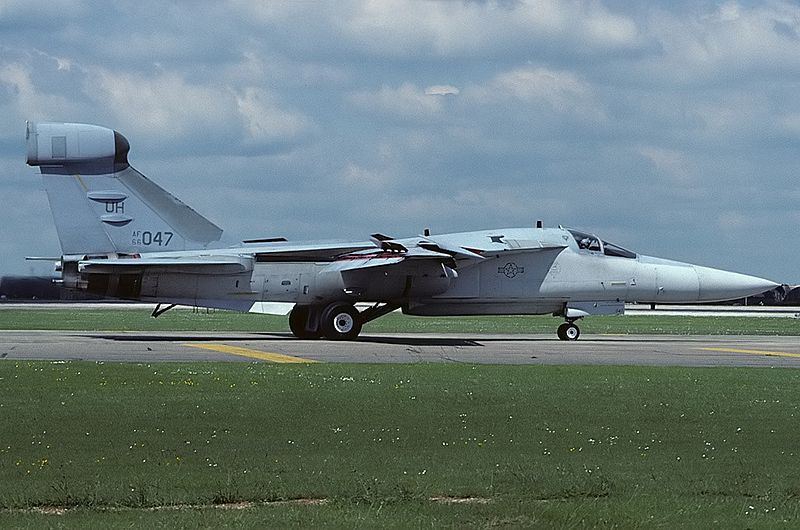 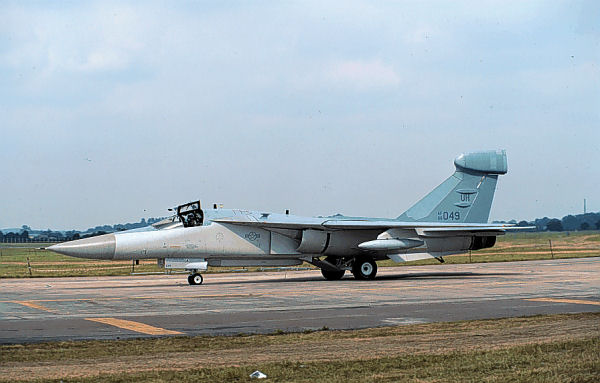 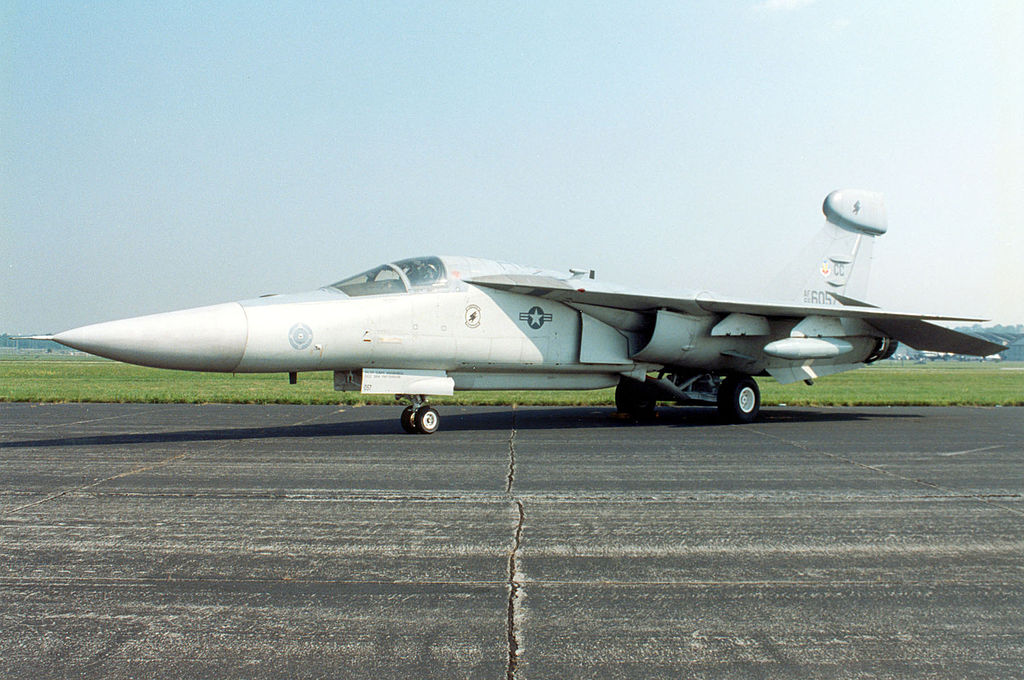 Hobbymaster General Dynamics–Grumman EF-111A Raven is now available to pre-order from Flying Tigers. Please click on the image below to go straight to the model page to order.

Hobbymaster have just announced their latest models and they are now available to pre-order at Flying Tigers today.
Many of these models have extremely low worldwide production quantities, so please order early to avoid disappointment.

72DG003 Oxford Diecast 1/72nd scale de Havilland DH84 Dragon EI- Abi Iolar has just arrived at Flying Tigers and is available to order. Pre-ordered models are on their way to you already. Please click on the image below to go straight to the model page. 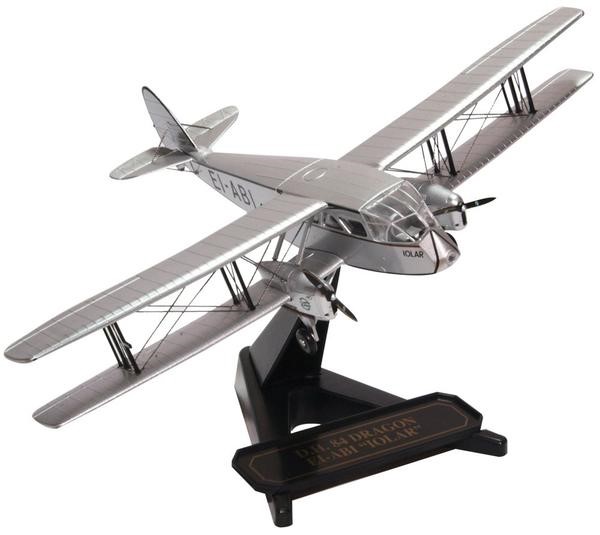 Airfix 1/24th scale model kit Hawker Typhoon MK.1B is now available to pre-order from Flying Tigers. Please click on the image below to go straight to the model page to order. 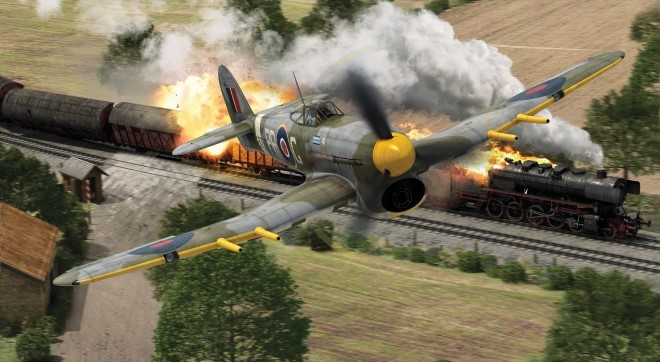 Flying Tigers has secured a very small re-stock (8 models) of Calibre Wings first release of CBW722401  SU-24 Fencer M White 16 Russian Air Force. Long since sold out with retailers if you missed out on this one, here is a last chance to get one at a reasonable price. Please click on the image to go straight to the model page to order.