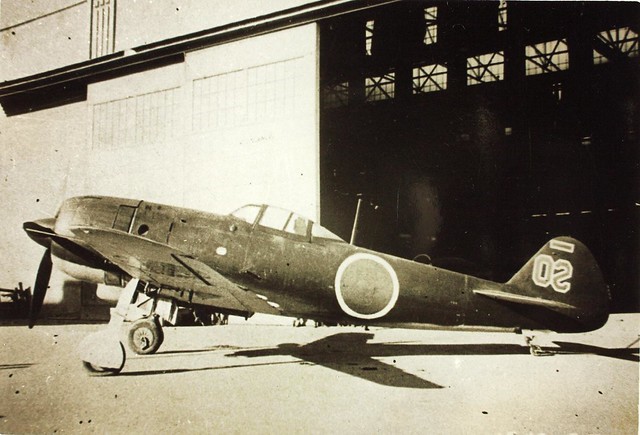 The Nakajima Ki-84 Hayate (Gale) is a single-seat fighter flown by the Imperial Japanese Army Air Service in the last two years of World War II. The Allied reporting name was “Frank”. The Ki-84 is generally considered the best Japanese fighter to operate in large numbers during the conflict. The aircraft boasted high speeds and excellent maneuverability with an armament (up to two 30 mm and two 20 mm cannon) that gave it formidable firepower. The Ki-84’s performance matched that of any single-engine Allied fighter it faced, and its operational ceiling enabled it to intercept high-flying B-29 Superfortress bombers. Pilots and crews in the field learned to take care with the plane’s high-maintenance Nakajima Homare engine and a landing gear prone to buckling. The difficulties of Japan’s situation late in the war took a toll on the aircraft’s field performance as manufacturing defects multiplied, quality fuel proved difficult to procure and experienced pilots grew scarce. Nevertheless, a well-maintained Ki-84 was Japan’s fastest fighter. A total of 3,514 aircraft were built.

Design of the Ki-84 commenced in early 1942 to meet an Imperial Japanese Army Air Service requirement for a replacement to Nakajima’s own, earlier Ki-43 fighter, then just entering service. The specification recognized the need to combine the maneuverability of the Ki-43 with performance to match the best western fighters, and heavy firepower. The Ki-84 first flew in March 1943 and deliveries from Nakajima’s Ota factory commenced in April 1943. Although the design was itself solid, growing difficulties in securing skilled pilots, proper fuel and construction materials, and adequate manufacture often prevented the aircraft from reaching its full potential in the field. 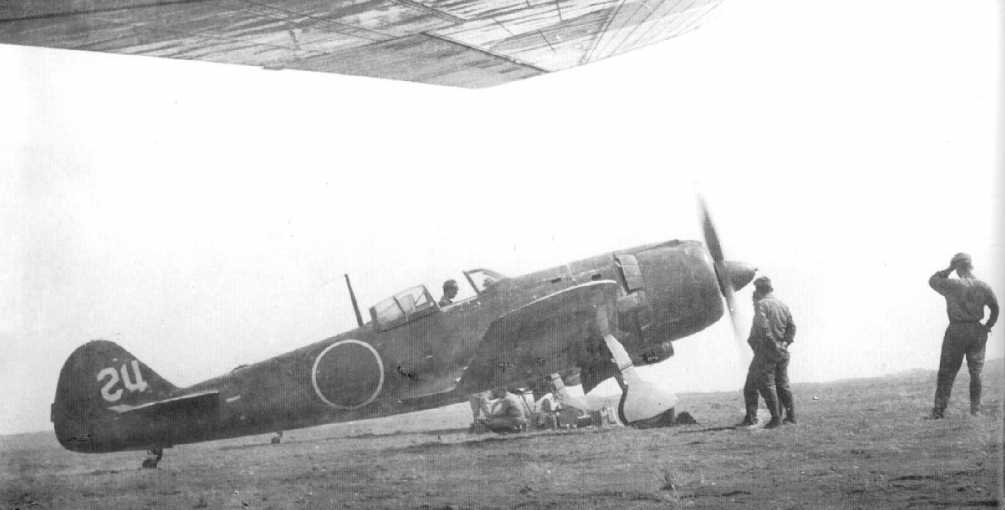 A prototype of the Nakajima Ki-84 with a unique exhaust stack, similar to a Ki-43’s

The design of the Ki-84 addressed the most common complaints about the popular and highly maneuverable Ki-43: insufficient firepower, poor defensive armor, and lack of climbing speed. The Ki-84 was a cantilever low-wing monoplane of all-metal construction, except for the fabric-covered control surfaces. It had retractable tailwheel landing gear. Armament comprised two fuselage-mounted, synchronized 12.7 mm (.50 in) machine guns — these proved challenging to synchronize properly with the Hayate’s four-blade propeller — and two wing-mounted 20 mm cannon, a considerable improvement over the two 12.7 mm (.50 in) machine guns used in the Ki-43 Hayabusa. Defensive armor offered Hayate pilots better protection than the unsealed wing tanks and light-alloy airframe of the Ki-43. In addition, the Ki-84 used a 65 mm (2.56 in) armor-glass canopy, 13 mm (.51 in) of head and back armor, and multiple bulkheads in the fuselage, which protected both the methanol-water tank (used to increase the effectiveness of the supercharger) and the centrally located fuel tank.

It was the Nakajima firm’s own-designed 35.8 litre displacement, Ha-45 Homare (“Praise or Honour”) air-cooled eighteen-cylinder radial engine, first accepted for military use in 1941, that gave the Hayate its high speed and prowess in combat. Derived from the Nakajima Homare engines common to many Japanese aircraft, the Hayate used the Homare 21 direct-injection version of the engine, using water injection to aid the supercharger in giving the Ki-84 a rated 1,491 kW (2,000 hp) at takeoff. This combination theoretically gave it a climb rate and top speed roughly competitive with the top Allied fighters. Initial Hayate testing at Tachikawa in early summer 1943 saw test pilot Lieutenant Funabashi reach a maximum level airspeed of 624 km/h (387 mph) in the second prototype. After the war a captured late-production example was tested in the US and achieved a speed of 680 km/h (422 mph) using 92 octane AvGas, plus methanol injection. 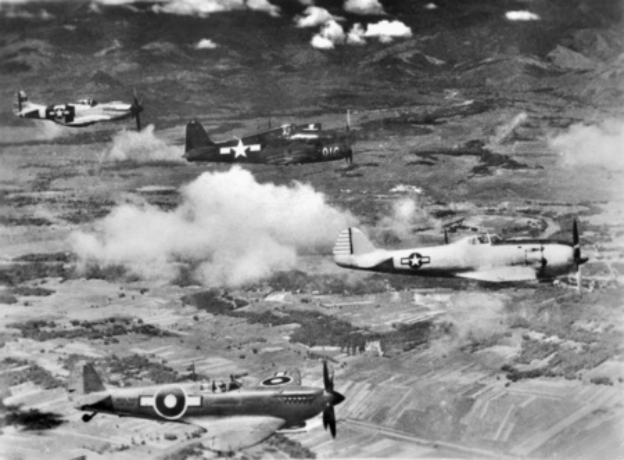 The complicated direct-injection engine was a compact design (only 3 cm/1¼ inches larger in diameter than the Ki-43’s 27.9 L 14-cylinder Nakajima Sakae radial) that required a great deal of care in construction and maintenance and it became increasingly difficult to maintain the type’s designed performance as the Allies advanced toward the Japanese homeland. To compound reliability problems, the Allied submarine blockade prevented delivery of crucial components, such as the landing gear. Many landing gear units were compromised by the poor-quality heat treatment of late-war Japanese steel. As a result, many Hayates suffered strut collapses on landing. Further damage was caused by inadequately trained late war pilots, who sometimes found it difficult to transition to the relatively “hot” Ki-84 from the comparatively docile Ki-43, which had a significantly lower landing speed.

The first major operational involvement was during the battle of Leyte at the end of 1944, and from that moment until the end of the Pacific war the Ki-84 was deployed wherever the action was intense.[8] The 22nd Sentai re-equipped with production Hayates. Though it lacked sufficient high-altitude performance, it performed well at medium and low levels. Seeing action against the USAAF 14th Air Force, it quickly gained a reputation as a combat aircraft to be reckoned with. Fighter-bomber models also entered service. On April 15, 1945, 11 Hayates attacked US airfields on Okinawa, destroying many aircraft on the ground.
In the final year of the war the Ki-84, the Ki-100 (essentially a radial-engined version of the inline-powered Kawasaki Ki-61) and Kawanishi’s N1K2-J were the three Japanese fighters best suited to combat the newer Allied fighters. 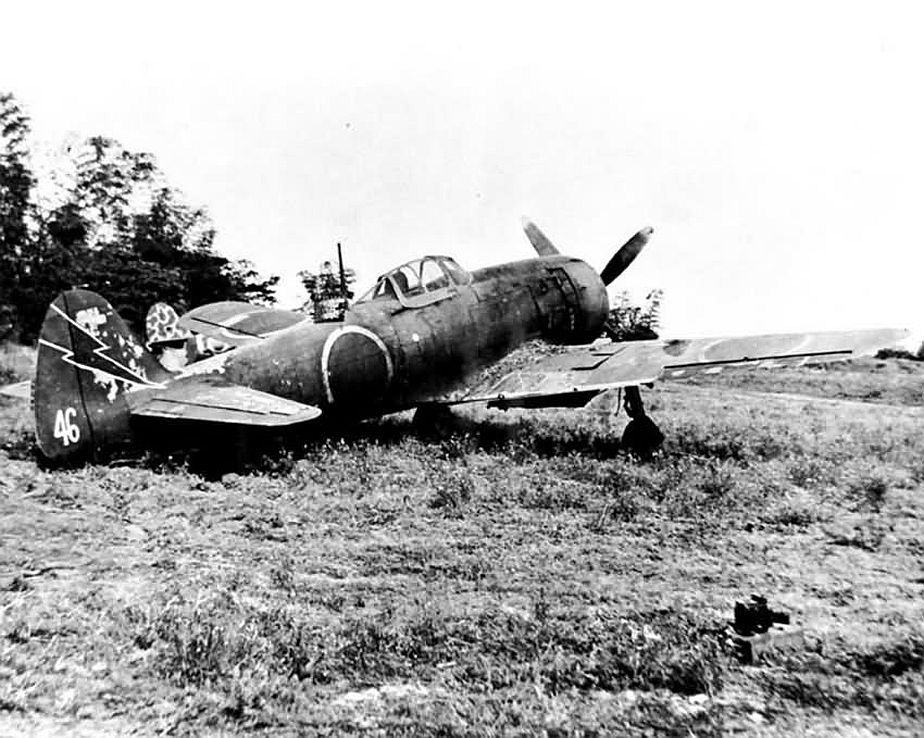 The Ki-84 is known to have appeared in three Japanese Ministry of Munitions sanctioned camouflage schemes:-

Type N: The entire airframe was left in its original natural metal. Because of the different grades of alloy used for various panels, the overall finish soon weathered or oxidized to a pale metallic grey, with variations in shade and texture, depending on the grade of duralumin used for each area of skin. A black “anti-glare” panel was painted on the top forward fuselage and engine cowling (see photo of 73 Hiko-Sentai aircraft).

Type B: Irregular blotches or stripes of dark green on the basic natural metal scheme. This was applied once the aircraft reached its operational base. On occasion the edges of national (hinomaru) and Sentai markings were accidentally covered.

Type S: Three variations were seen on Ki-84s; S1 – Dark green upper surfaces, with light gray/green lower surfaces. S2 – The light gray/green on the lower surfaces was replaced by a pale blue/gray. These colors were often applied on an unprimed airframe; because of this and the poor adhesion of Japanese paints in the later years of the war this scheme often weathered quickly, with large patches of natural metal being visible (see photo of 85 Hiko-Sentai Ki-84 on a Korean base). S10 – The upper surfaces were left in a red/brown primer with the under surfaces in natural metal. The black anti-glare panel was optional.

Other schemes were applied, particularly by the Shinbu-Tai “Special Attack” units. For example, a Ki-84 of 57 Shinbu-Tai, flown by Corporal Takano, had very dark brown-green upper surfaces (some sources state black), with a large red “arrow” outlined in white painted along the entire length of the fuselage and engine cowling. White Kana characters “hitt-chin” (be sure to sink) were painted above the arrow on the rear fuselage. The under surfaces were light gray.

Factory applied markings included six hinomaru (national insignia), outlined with a 75 mm (2.95 in) white border on camouflaged aircraft, on either side of the rear fuselage and on the upper and lower outer wings. Yellow/orange identification strips were applied to the leading edges of wings, extending from the roots to ⅓ of the wingspan. 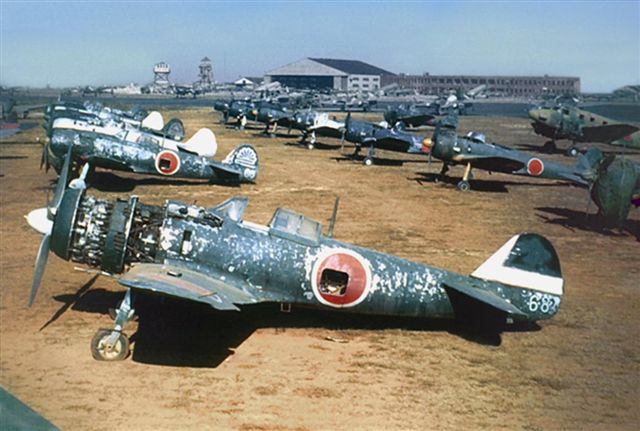 Ki-84s and Ki-43s photographed on a former JAAF base in Korea post-war. The Ki-84 in the foreground is from the 85th Hiko-Sentai, the next one in line belonged to the 22nd Hiko-Sentai HQ Chutai. 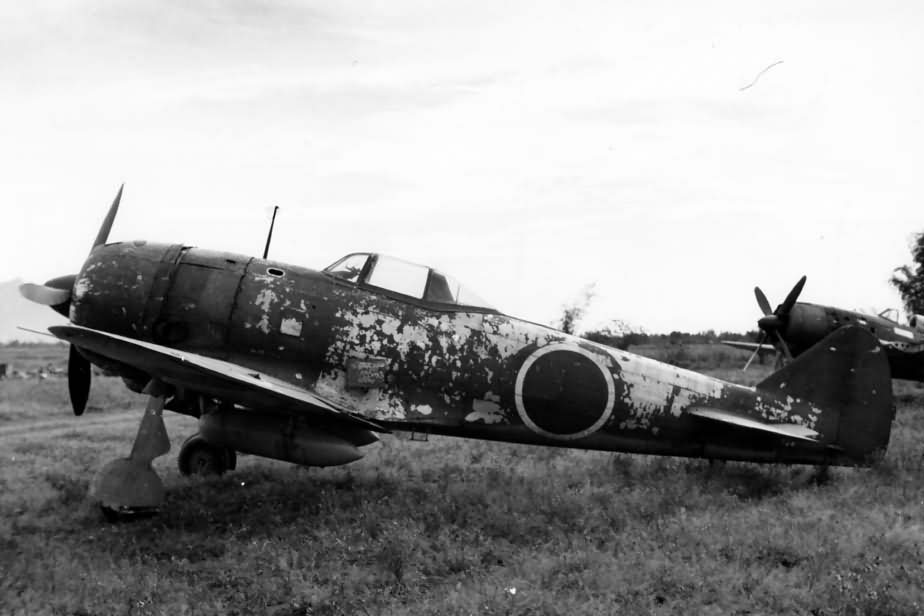 After the war a number of aircraft were tested by the allied forces, two at the Allied Technical Air Intelligence Unit – South-West Pacific Area (ATAIU-SWPA) as S10 and S17 and a further two in the United States as FE-301 and FE-302 (Later T2-301 and T2-302).

One example captured at Clark Field during 1945, serial number 1446, was transported aboard the USS Long Island aircraft carrier to the United States. In 1952 it was sold off as surplus to Edward Maloney, owner of the Ontario Air Museum (Planes of Fame Air Museum) and restored to flying condition before being returned to Japan for display at the Arashiyama Museum in Kyoto in 1973. With unsupervised access allowed to the aircraft, parts were stolen from the Ki-84, and coupled with the years of neglect it could no longer fly. Following the museum’s closure in 1991, the aircraft was transferred to the Tokko Heiwa Kinen-kan Museum, Kagoshima Prefecture, where it still is displayed to this day. It is the only surviving Ki-84. 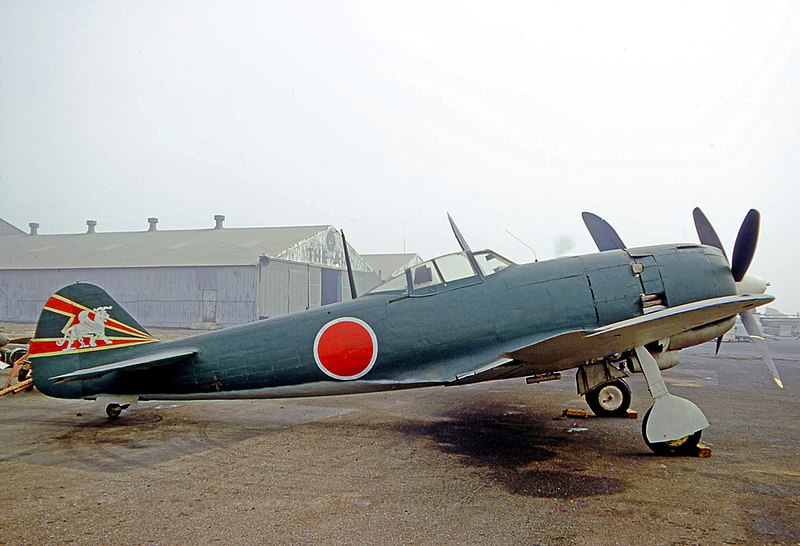 Check out the Nakajima Ki-84 Hayate in 1/72nd scale below. Please click on the image or link below to go straight to the model page to order. 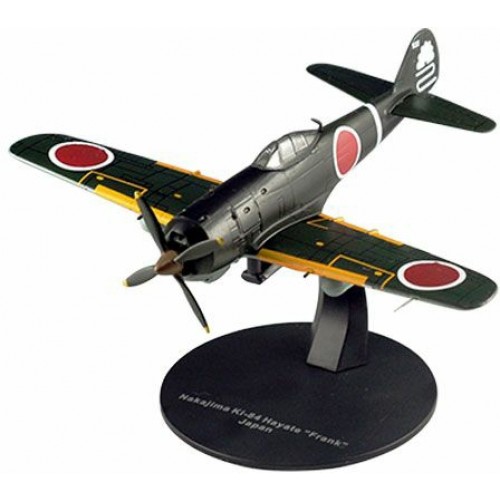 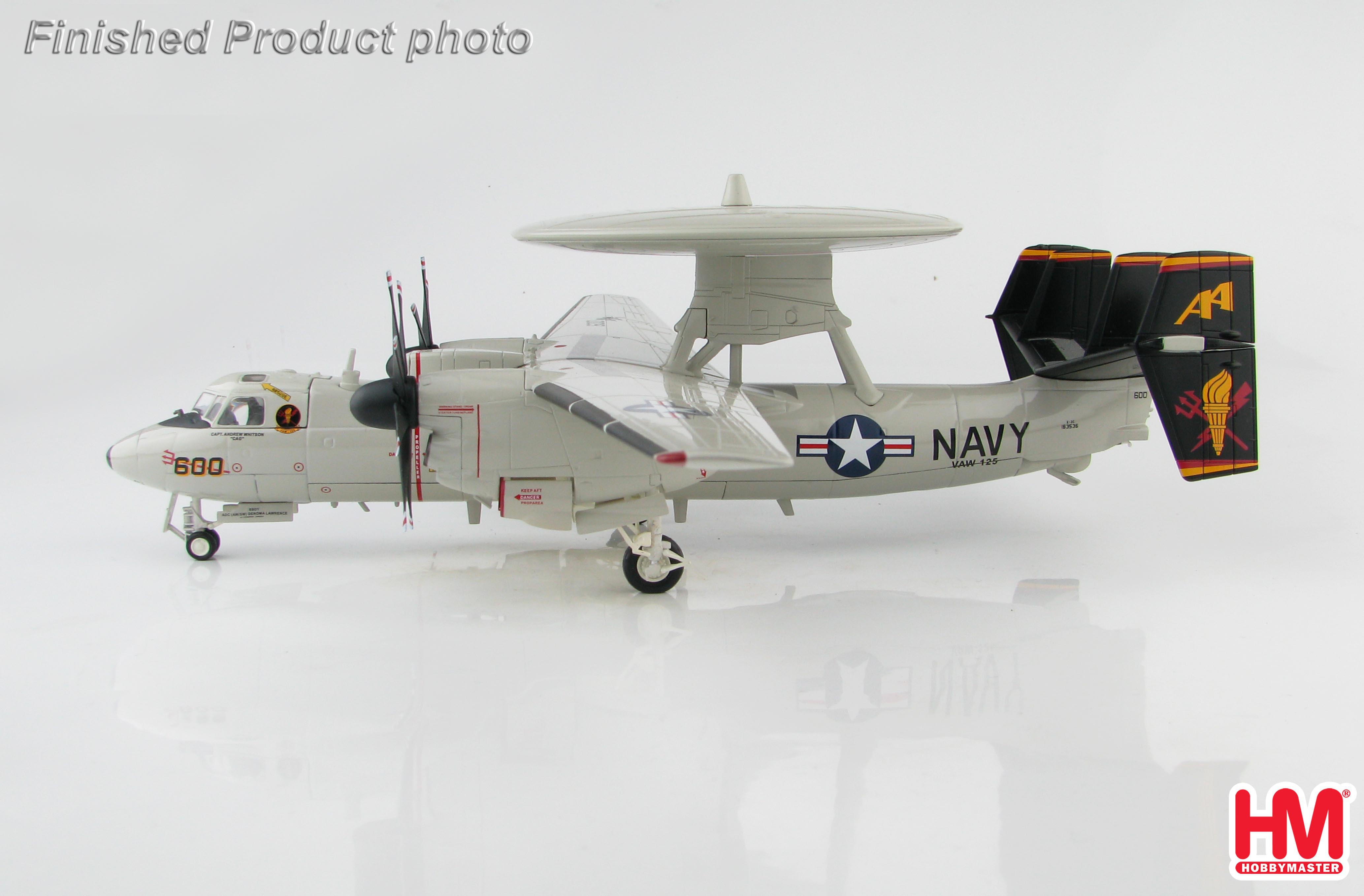 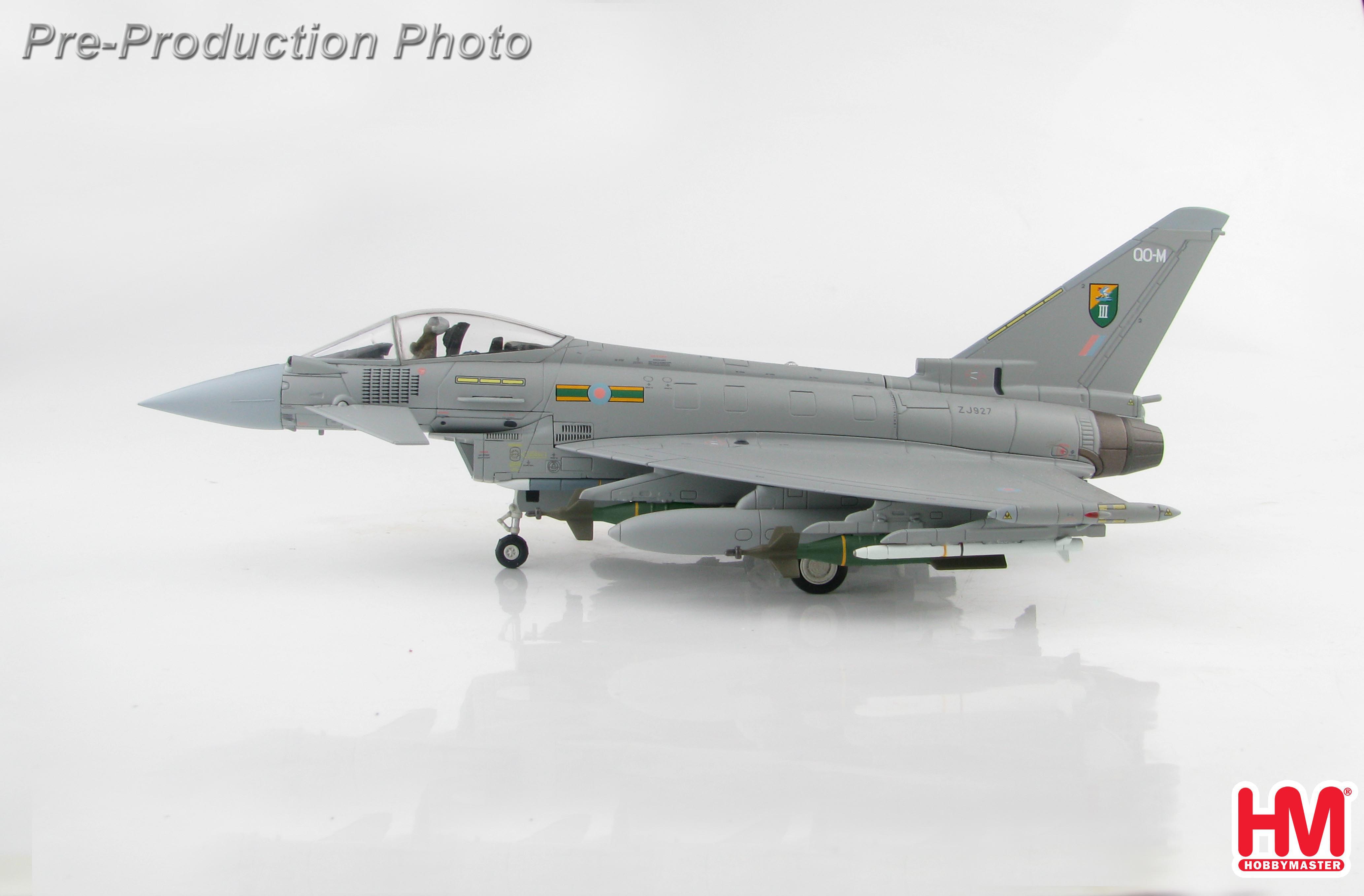 Check out the Flying Tigers “End of Year Sale” . Please click on the links below to go straight to the sale offers. 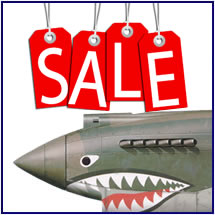 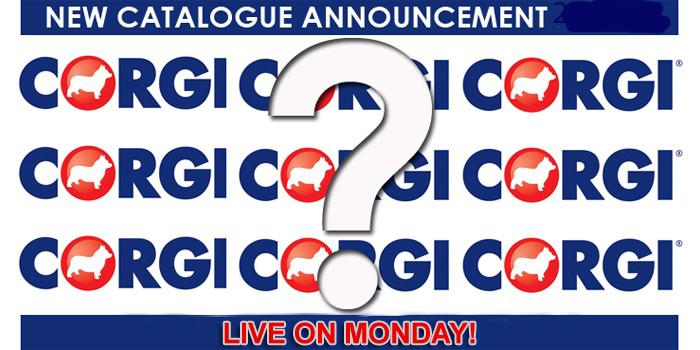 The New 2020 Corgi Aviation Archive catalogue is released on Monday. Don’t forget to check this out on Flying Tigers. We will add all the new catalogue models as soon as possible.