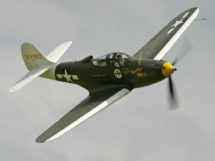 The Bell P-39 Airacobra was one of the principal American fighter aircraft in service when the United States entered World War II. The P-39 was used by the Soviet Air Force, which scored the highest number of individual kills attributed to any U.S. fighter type in the Eastern European theatre. Other major users of the […]

Strike Fighter Squadron 41 (VFA-41) also known as the “Black Aces”, is a United States Navy strike fighter squadron based at Naval Air Station Lemoore, California, flying the F/A-18F Super Hornet. They are attached to Carrier Air Wing 9 (CVW-9), which are currently deployed aboard the USS John C. Stennis. Their radio call sign is […]