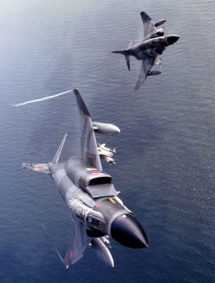 The McDonnell Douglas F-4 Phantom II is a tandem two-seat, twin-engine, all-weather, long-range supersonic jet interceptor aircraft/fighter-bomber originally developed for the United States Navy by McDonnell Aircraft. It first entered service in 1960 with the U.S. Navy. Proving highly adaptable, it was also adopted by the U.S. Marine Corps and the U.S. Air Force, and […]

The magnificent McDonnell Douglas F-4 Phantom II was one of the most successful jet aircraft of all time and is still much loved by aircrew and enthusiasts alike.  Without doubt, the Phabulous Phantom has been the most successful model in the Hobbymaster range to date and this section features the few Hobbymaster Phantoms that we […]