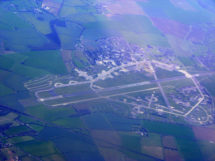 RAF Upper Heyford was a Royal Air Force station located 5 miles (8 km) north-west of Bicester near the village of Upper Heyford, Oxfordshire, England. In the Second World War the airfield was used by Bomber Command. During the Cold War, Upper Heyford was one of the former RAF bases chosen to house the […]