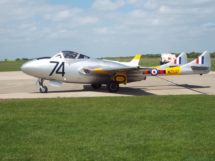 The de Havilland Vampire is a British jet fighter developed and manufactured by the de Havilland Aircraft Company. It was the second jet fighter to be operated by the RAF, after the Gloster Meteor, and the first to be powered by a single jet engine. Work on the Vampire commenced during 1941 in the midst […]

The latest model announcements in the Corgi Aviation Archive range are now available to view and pre-order on the Flying Tigers Website.