The most popular section of the Flying Tigers website is our New die-cast model aviation section, which is fully updated with all the latest model releases, from all the leading manufacturers. 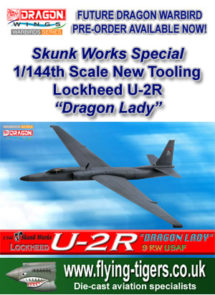 Die-cast aviation collecting will soon be able to boast the addition of a Lockheed U-2R ‘Dragon Lady’ spy plane to its ranks.  This magnificent New Tooling brings us this Skunk Works high altitude reconnaissance aircraft for the very first time and as this first release completed missions from RAF Fairford, it looks destined to be […]