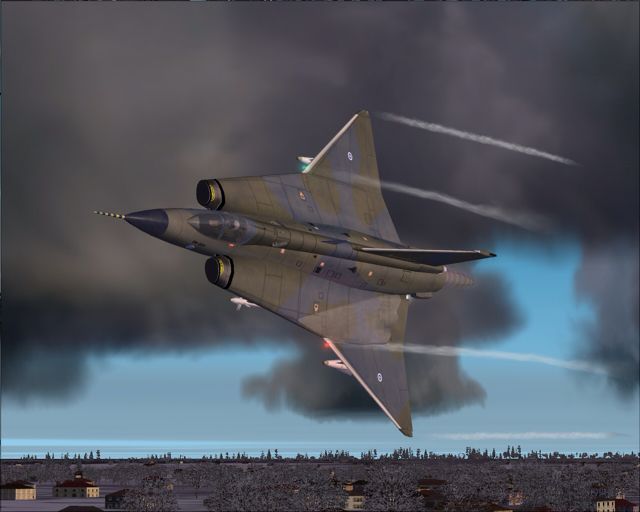 The Saab 35 Draken was a Swedish fighter aircraft manufactured by Saab between 1955 and 1974. The indigenous J 35 was an effective supersonic Cold War fighter that was also successfully exported to Austria, Denmark, and Finland. The Draken was the first fully supersonic aircraft to be deployed in Western Europe. 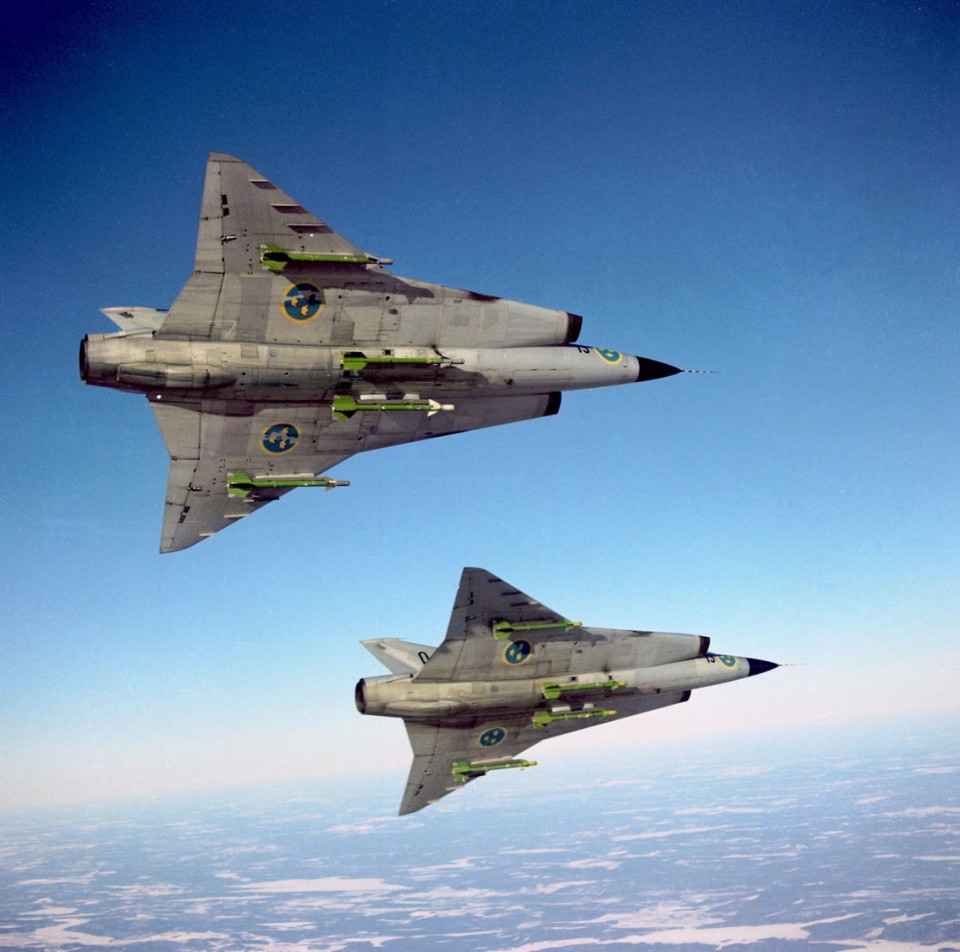 As the jet era started, Sweden foresaw the need for a jet fighter that could intercept bombers at high altitude and also successfully engage fighters. Although other interceptors such as the US Air Force’s F-104 Starfighter were being conceived during the same period, Saab’s “Draken” would have to undertake a combat role unique to Sweden. Other demanding requirements were the capability to operate from reinforced public roads used as part of wartime airbases, and for refuelling/rearming to be carried out in no more than ten minutes, by conscripts with minimal training. In September 1949, the Swedish Defence Material Administration issued a request for a fighter/interceptor aircraft, and work began at Saab the same year. 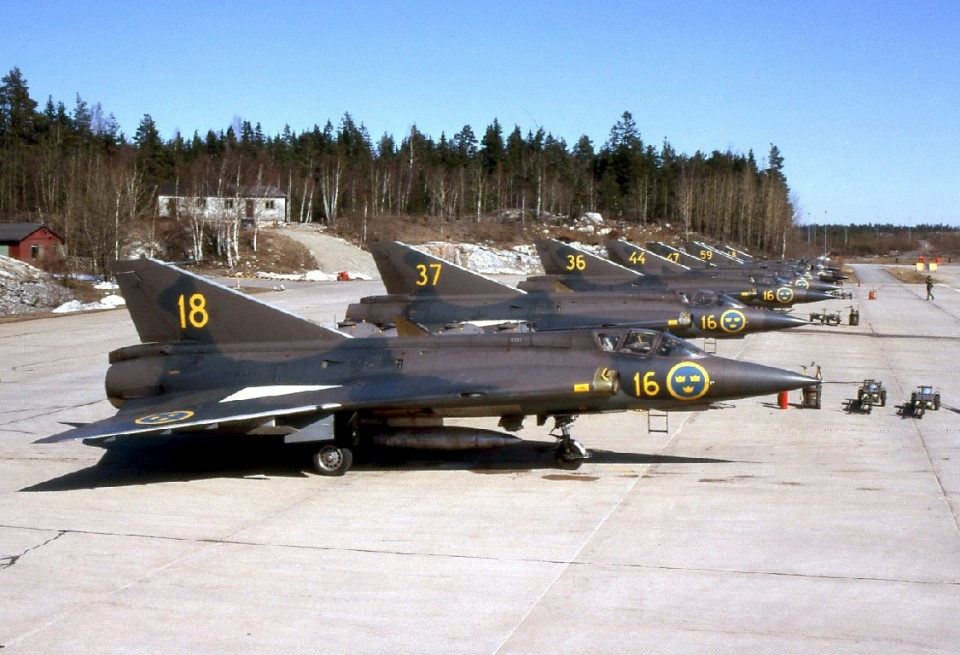 The double-delta shape was so revolutionary that it warranted the only sub-scale test aircraft built in Sweden: the Saab 210, unofficially nicknamed “Lilldraken” (the little kite). The Saab 210 tested the concept of the double delta, first flying on 21 January 1952. The 210’s successful testing results led to an order for three full-size Draken prototypes. The first prototype, not fitted with an afterburner, made its maiden flight on 25 October 1955. The second prototype, equipped with an afterburner, unintentionally broke the sound barrier on its first flight while climbing. 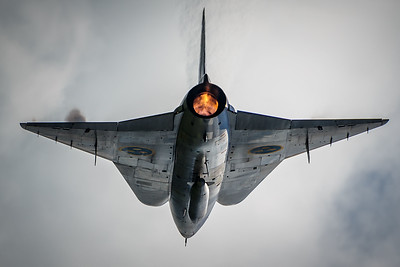 Although the J 35 Draken was not designed to be a dog-fighter, it proved to have a good quick-turn capability and was a capable fighter plane. It entered service with the Swedish Air Force in 1960. A total of 651 Saab Drakens were manufactured. Sweden’s fleet of Drakens came in six different versions, and two other models of the Draken were offered for export. The early models were intended purely for air defense. The last model built was the J 35F, the final version to remain in Swedish service. These aircraft were retired in the 1990s and replaced by the Saab JAS 39 Gripen .

The J 35 Draken design underwent several upgrades. The last was the J 35J version, made in the late 1980s, although by then, the Draken had been almost replaced by the Saab 37 Viggen in the Swedish Air Force. The J 35J was a service-life extension program because the delivery of the new Saab JAS 39 Gripen was suffering delays. The extension program was intended to keep the Draken flying into the 2000s, but due to cutbacks and high maintenance costs, the Draken was phased out of Swedish service in December 1998, although the aircraft remained in limited numbers in both military and civilian roles.Its export customers included Denmark and Finland. In 1985, the Austrian Air Force purchased 24 J 35Ds reconditioned by Saab, re-designated the J 35Ö. 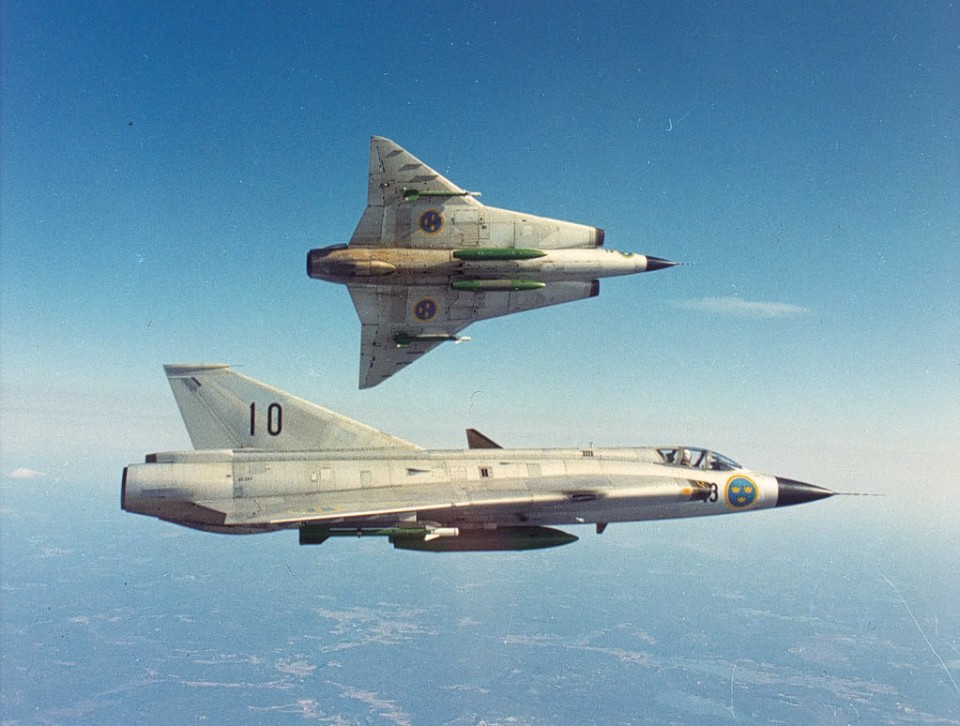 All Drakens are interceptors with limited air-to-ground capability, with the sole exception of the Danish Drakens, which are strike aircraft capable of carrying AGM-12 Bullpup missiles, electronic countermeasures, and increased internal and external fuel storage. 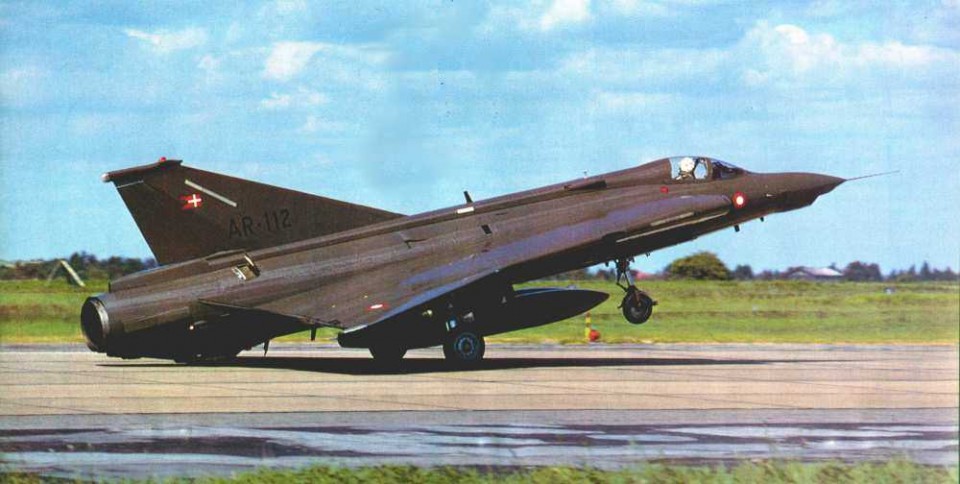 The Danish Drakens are so far the heaviest of the series to have flown. Danish J 35 aircraft were retired in 1993. Finland updated its 35XS fleet with new avionics, cockpit displays, navigational/attack systems, and electronic countermeasures during the 1990s, but these were finally retired in 2000 to be replaced by F/A-18 Hornets. Austria was the last country to keep the Draken in military service. 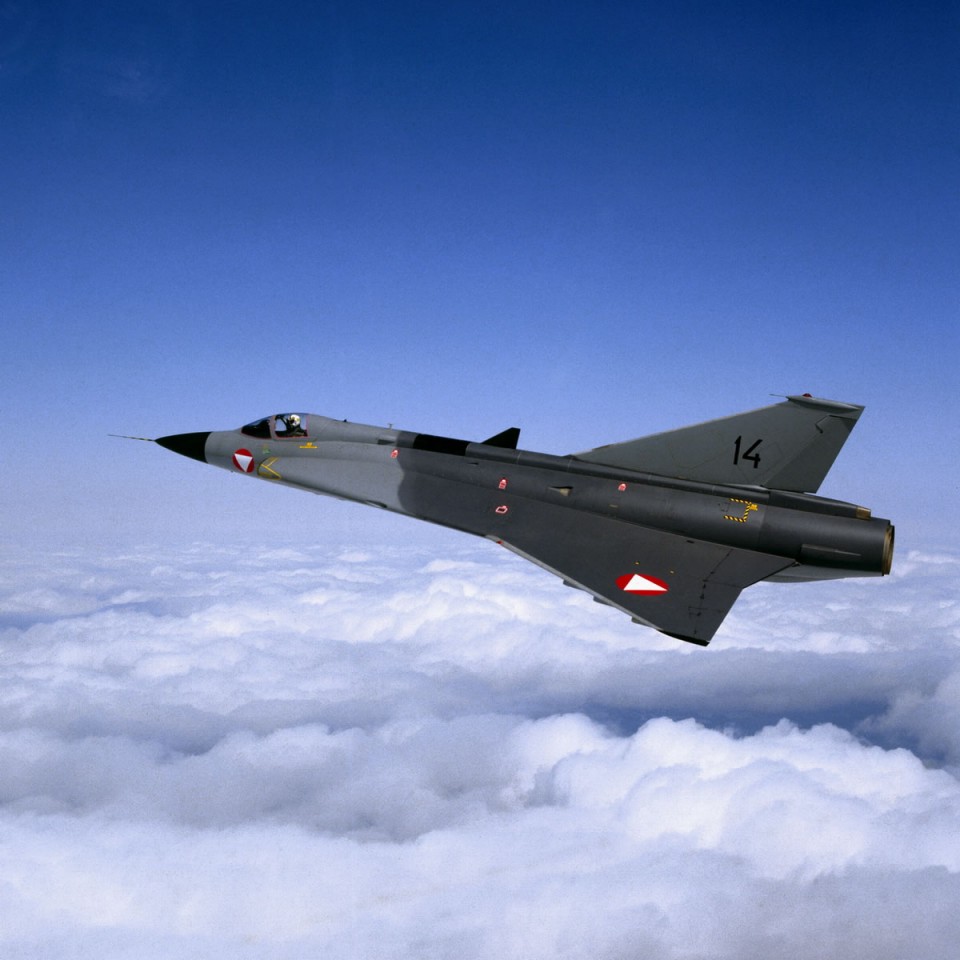 The Austrian Air Force bought refurbished J 35Ds. This was the last Austrian Air Force fighter plane with internal cannons for their lone air-to-air armament because of the restriction in the Austrian State Treaty of 1955. This forbade their carrying air-to-air missiles. This restriction was dropped in 1993 because of violations from the nearby Yugoslavian air combat services. American AIM-9 Sidewinder missiles were purchased. These Drakens were retired in 2005, when they were replaced by former Swiss Air Force F-5 Tiger IIs, while waiting for new Eurofighter Typhoons. 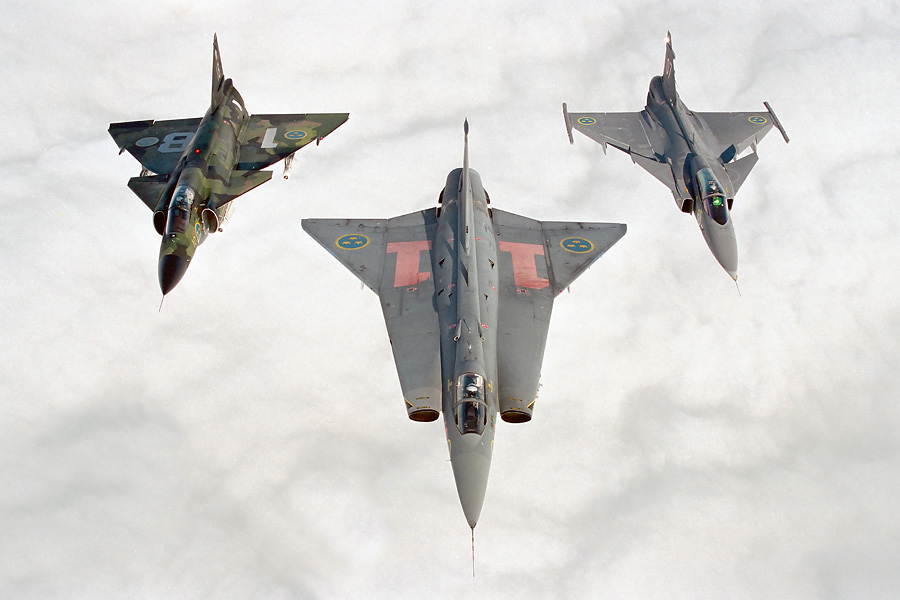 The latest Saab Draken model from Aviation 72 has just landed at Flying Tigers. Thank you to all of those that have re-ordered your model through Flying Tigers. Your models will be dispatched to you early next week. Many of them will be “flying ” home to Sweden ! I have a small amount of stock available for those who have missed out on the Pre-order, so order early to avoid missing out. There are other Swedish aircraft models that are available to add to your Aviation 72  collection and are available to order from Flying Tigers. I have added them to this week’s newsletter. Please click on the images or links to go straight to the model on the website. 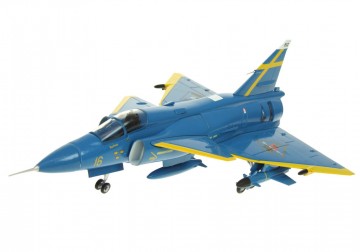 I have added the latest Air Commander model to the Flying Tigers website. As many of you know, these models are especially fine detailed models and as such are for the connoisseurs among you ! I will only be bringing in sufficient for those that Pre-Order this model and a few more to add to my stocks. The cut off date for Pre-orders will be the 19th December. Please get your order in before then. 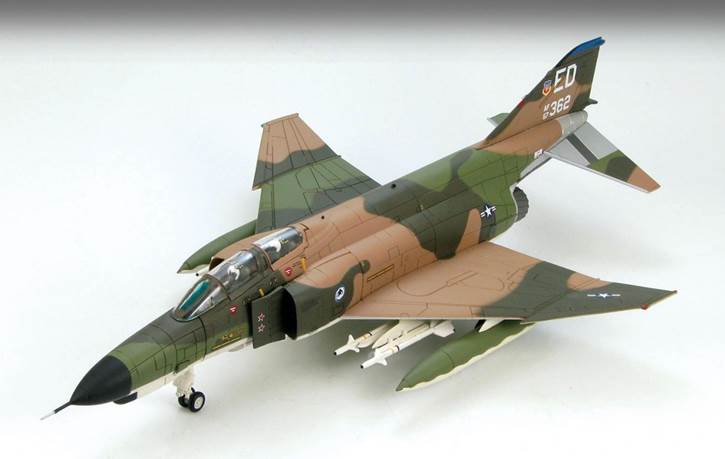 The latest Tiger Moth from Aviation 72 has arrived and is ready to ship out. Once again thank you for all your Pre-Orders. I will be dispatching your models to you on Monday. I have ordered additional stock for the website  for late comers to this model. Please click on the image below to go straight to the model. 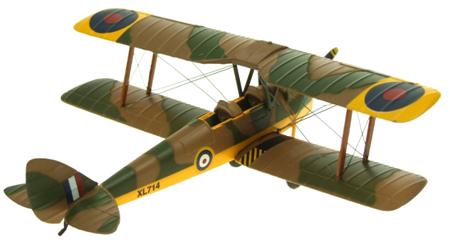 I have also added the latest three models to the New and popular Wings of War series of WWI models in 1/72nd scale resin. These are now in stock and ready for dispatch. 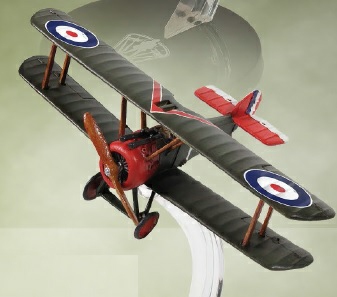 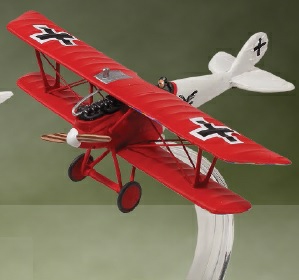 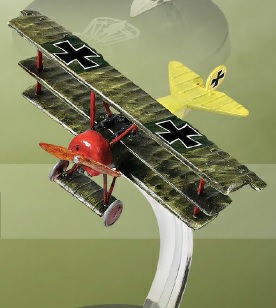 A big thank you to the positive feedback on the new Homepage and your ideas for further improvements to the website. I will be taking all your comments on board. Over the course of the next few weeks I will be adding further brands … so watch this space !

Thank you for taking time to read this weeks Newsletter.