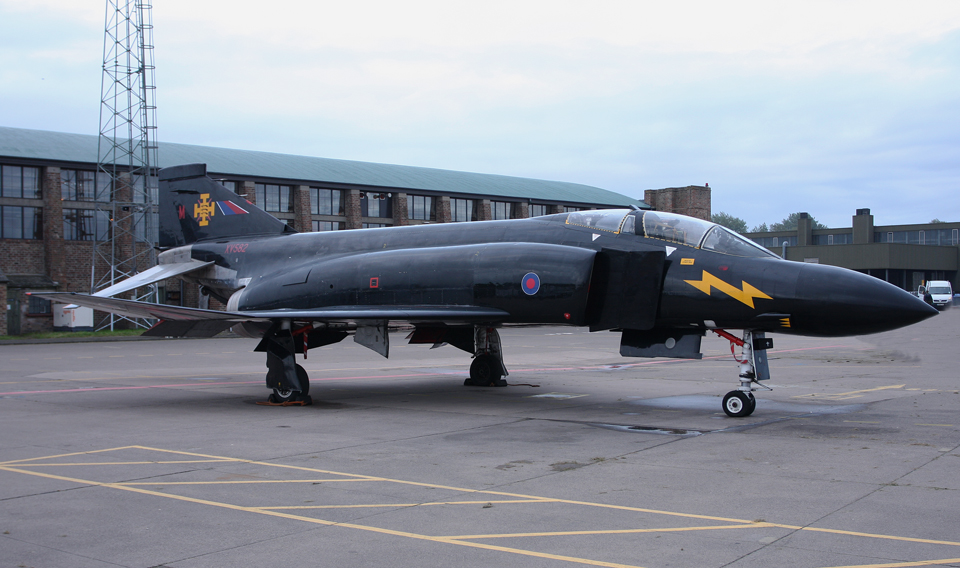 There are some aircraft types that seem to possess something that little bit special, when it comes to popularity amongst aviation enthusiasts and die-cast aviation collectors alike.  Spitfires, Mosquitos and Lancasters would certainly qualify in the propellor powered era, but when talking about jet aircraft, there is one aircraft that almost universally seems to rise above all others – the magnificent McDonnell Douglas F-4 Phantom II.  Without doubt one of the most successful jet aircraft ever to take to the skies, the Phantom is now a very old aircraft indeed and many of us will have seen our last flying example many years ago.  As the Luftwaffe finally retired their remaining machines last year, in something of a blaze of glory, the Phantom was yet again reminding us just how much we love them and how sorely they are going to be missed.  Indeed Europe has been a strong supporter of the Phantom over the years and Germany certainly does not have the monopoly on attractive Phantoms – our header image this week is one of Britain’s finest, but one which is very much in need of our help!

In all honesty, has a jet aircraft ever looked as good as this?  What an absolute beauty she is.  The picture above was taken at the 2008 Leuchars Airshow, long after the crowds had disappeared – indeed, a friend and I loitered around for hours, waiting for the barriers to be removed from around the aircraft, so we could get a clear shot of this fabulous aeroplane.  We just managed to grab a quick couple of shots, before being chased off the base by an officer with a very sinister sounding voice, but it was certainly worth incurring his wrath.  One of the most famous Phantoms to see RAF service, XV582 was the only FG.1 machine to serve with No.228 Operational Conversion Unit and was the first machine to pass 5000 flying hours.  She was also used in the record breaking ‘Lands End to John O’Groats Run’, on 1st April 1989, where she covered the 590 mile distance in just 46 minutes and 44 seconds – an average speed of over 757 mph.

The beautiful presentation of ‘Black Mike’ is very much a tribute to Royal Air Force ‘Treble One’ Squadron and their illustrious history.  Painted in this handsome gloss black scheme and sporting the Squadrons distinctive markings, ‘Black Mike’ was intended as a tribute to the massed formations of Hawker Hunters (Black Arrows) and Lightnings flown by the Squadron in the classic jet era and XV582 was selected as she was a limited fatigue life remaining airframe.  Initially, this was just thought to be a short-term arrangement, but such was the interest in the aircraft, that she instantly became one of the most famous and best loved aircraft in the RAF.  Intended just for static display, the aircraft was so popular that she was to take to the air again, with a series of spectacular pictures remaining to mark her final months of operational flying and surely one of the RAF’s most distinctive jet fighters. 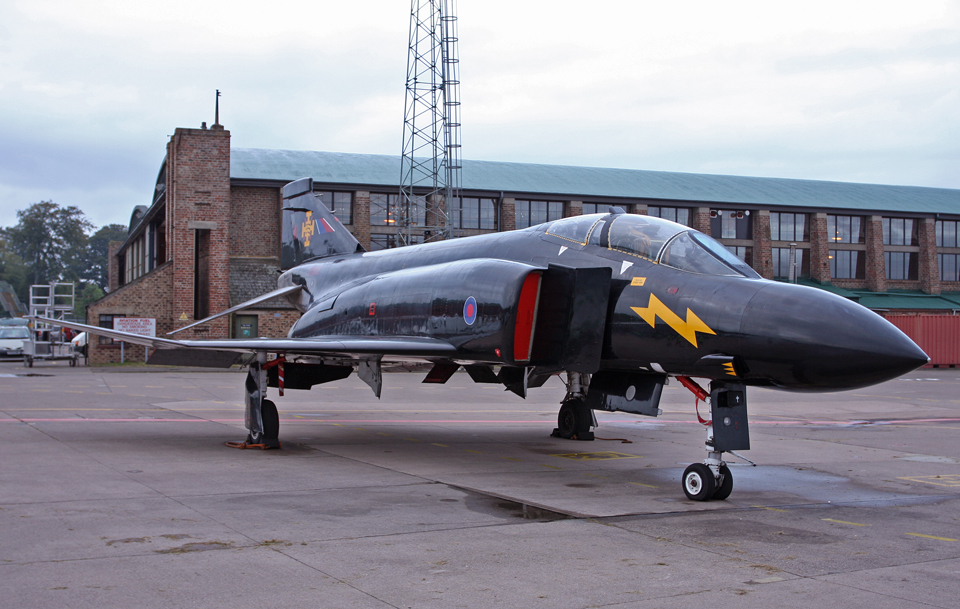 All good things must come to an end and the flying days of XV582 ended in 1992, when she landed back at RAF Leuchars for the last time.  Thankfully, it was always likely that an aircraft of this stature would be preserved in some capacity and she became the unofficial gate guardian of ‘Treble One’ Squadron, – obviously not ideal, this was an outdoor posting!  She was also usually to be found in a prominent location at the Station’s September Battle of Britain at home day’s, where she would always draw a sizeable crowd of aviation admirers, despite the attendance of much more modern air power.  With the withdrawal from service of the Tornado F.3 and the disbandment of No.111(F) Squadron, ‘Black Mike’ was stored in one of the hardened aircraft shelters at Leuchars, where she was used as an instructional airframe and again made available for Airshow duties.  In remarkably good condition, ‘Black Mike’ was the cause of great concern following the announcement that Leuchars was to cease RAF operations and close, leaving the aircraft in an extremely vulnerable position.  Put up for disposal by the RAF, she was thankfully secured by a group of enthusiasts and ex servicemen, determined to preserve this magnificent aeroplane for future generations.  She is due to be transported to the Cold War Jets Collection at Bruntingthorpe, but not before further significant funding is secured for dismantling and transportation costs.  With many people already supporting this fantastic project, new members would be more than welcome and donations of whatever amount you can afford will be gratefully received.  For more details on how to do this, type ‘save Phantom XV582 Black Mike’ into your search bar.  I wish the team every success with their endeavours and I very much look forward to seeing Britain’s most famous Phantom at her new home in the very near future.

The McDonnell Douglas Phantom II – A legend in die-cast! 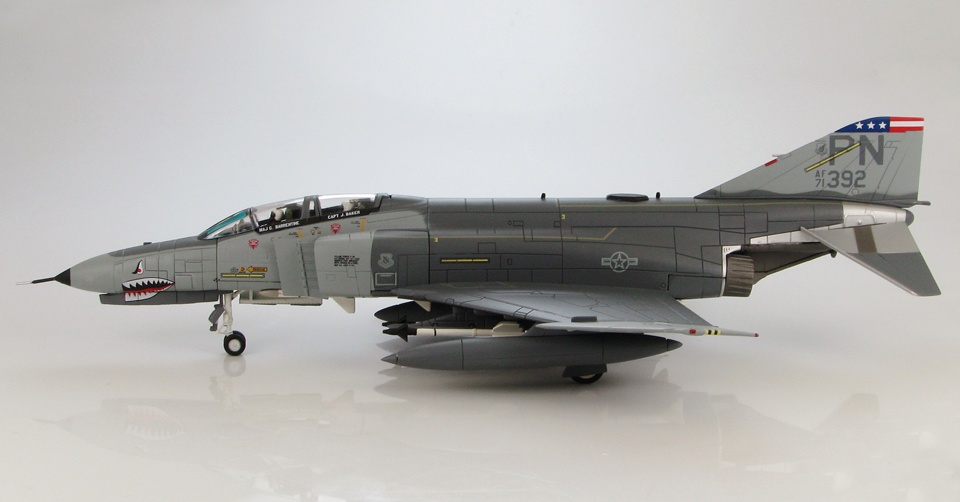 Not only is the mighty McDonnell Douglas F-4 Phantom a legend amongst aviation enthusiasts the world over, it also has to be regarded in exactly the same terms within the die-cast aviation collecting fraternity.  The continuing popularity of the Phantom in die-cast is nothing short of astonishing and I would have to say that we have supplied more Phantom models to our collectors than any other aircraft type, during our eight plus years of trading.  With around a hundred different Phantom models already in the market, you would think that interest in McDonnell’s finest would be waning somewhat, but this could not be further from the truth – as new models are announced, they seem to receive just as much ordering activity as when this classic first appeared on the market.  Not only was the Phantom extensively used by the US Navy, Air Force, Marine Corps and ANG, it was also used by a multitude of air arms the world over and there seems to be an endless supply of appealing liveries for the manufacturing companies to choose from.  Some of these models are also commanding astonishing prices on the secondary market – this is great for us collectors who have the models sitting comfortably within our collections, but not so great if you need these models to finish off your collection.

Our latest OFFER OF THE WEEK

As we have been selling our remaining model stocks at significant discounts for some weeks now, we are selling out of lines on a regular basis and the Phantom is no exception.  As collectors look to snap up a bargain before they disappear for good, we are now in a situation that all the models we place on offer are only available in very low quantities.  Our latest OFFER OF THE WEEK is no exception and we have some extremely popular models available at very attractive prices – the only downside being that they are only available in very small numbers.  For example, the X-Plus JASDF ‘Black Panther’ is an absolutely stunning model, but I am afraid that we only have TWO examples available.  We are doing a little better with the Air Commander Evaluators ‘Vandy 5’ Phantom, where we have SIX models available and at these attractive prices, I expect both to be sold out before Saturday, when I will be forced to remove them from the website.  The same is true of the FOUR Hobbymaster Phantoms which are on offer, which are again only available in small numbers and will certainly have sold out by the time we are processing all the orders on Monday morning.  For Phantom phanatics, time is certainly of the essence this weekend and you really will need to place your orders early if you want to secure one of these phantastic models – (I know I am spelling it wrong, but I am in Ph…antom mode).  To take a look at the models we have on offer this weekend, please click on this link and head for our OFFER OF THE WEEK section and good luck!

Deal of the Day – Weekly Review

Two weeks in to our new DEAL OF THE DAY feature and we now have a new record for daily web hits on the Flying Tigers website – it seems that our readers are quite fond of a daily die-cast fix of well priced models and this new feature is going from strength to strength.  This week, we had another eclectic mix of die-cast aviation items for your delectation, with most either completely selling out, or being down to the last example – let’s take a quick look at this weeks offer models. 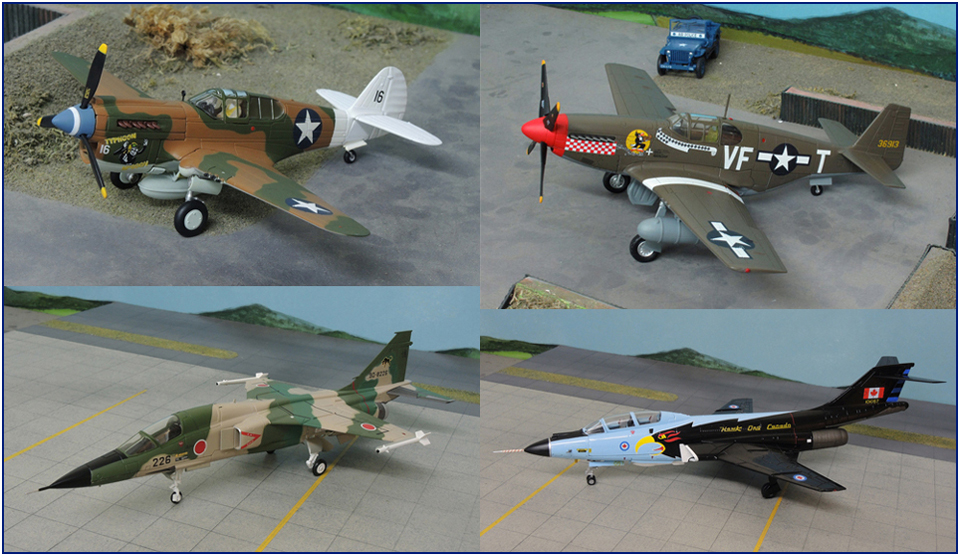 On Monday, we went with another classic Corgi model, which has never previously been offered on the Flying Tigers website.  AA35211 is the 2006 release of Curtiss P-40E Warhawk ‘Typhoon McGoon’, which operated out of Port Moresby, New Guinea against Japanese forces.  Flown by USAAF Ace Clyde Kinsley, the aircraft features unique nose artwork and is a full limited edition release – we now only have ONE model available.  Tuesday saw an absolute beauty of a model offered, in the shape of Royal Canadian Air Force McDonnell Douglas CF-101 Voodoo ‘Hawk One Canada’.  HA3704 presents this magnificent aircraft, which was the lead aircraft of the 409th All-Weather Fighter Squadron ‘The Nighthawks‘ and was the second aircraft to wear this spectacular scheme – the first aircraft was lost in a flying accident.  Again, we just have one of these beautiful models still available.

Our mid-week model offer was from the 1/48th scale Hobbymaster fighter range.  North American P-51B Mustang ‘Shangri-La’ was the first release in the new Razorback Mustang series and I am afraid that they totally sold out overnight, so there is not much point discussing this model any further.  Our latest offer is a really handsome 1/72nd scale JASDF jet, which may not be to every collectors taste, but is a quite magnificent model and a very unusual subject.  The Mitsubishi F-1 is an indigenous Japanese Fighter Bomber, which is similar in profile to the SEPECAT Jaguar and served extensively with the Japanese Air Self Defence Force.  If you have never seen one of these models in the flesh, you are missing out – they are beautifully finished and add a very welcome splash of colour to our display shelves. We currently still have THREE models available – to take a closer look at any of the models we still have available, please click on one of the links above for more details.  We will have another four models available for you next week, so please make sure that you check our Deal of the Day section every day, to see what we have on offer.

Well, that’s another Newsletter done.  I hope that it has been an interesting read for you and that you have managed to get around this week, despite the snow.  Don’t worry – it will be Airshow time, before we know it!