Marine Fighter Attack Squadron 121 (VMFA-121), also known as the “Green Knights”, is a United States Marine Corps aircraft squadron operating the F-35B Lightning II. The squadron is based at Marine Corps Air Station Iwakuni, Japan and falls under the command of Marine Aircraft Group 12 (MAG-12) and the 1st Marine Aircraft Wing (1st MAW). Their tail code is VK and their radio call sign is “Combat”.

Marine Fighting Squadron 121 (VMF-121) was activated on June 24th, 1941. The Green Knights began combat operations flying the F4F Wildcat and later the F4U Corsair as charter members of the Cactus Air Force and throughout the Battle of Guadalcanal arriving in October 1942. The squadron also fought from the forward air bases of Espirito Santo, Turtle Bay, Bougainville, and Emirau. On September 15th, 1944, the Green Knights landed on Peleliu and fought there until July 25th, 1945. They returned to the United States to be deactivated on September 9th, 1945. During the Pacific War, VMF-121 produced fourteen fighter aces, more than any other squadron, including Medal of Honor recipient, Major Joseph J. Foss. VMF-121 downed 208 Japanese aircraft (165 flying Wildcats and another 44 flying Corsairs) in aerial combat. 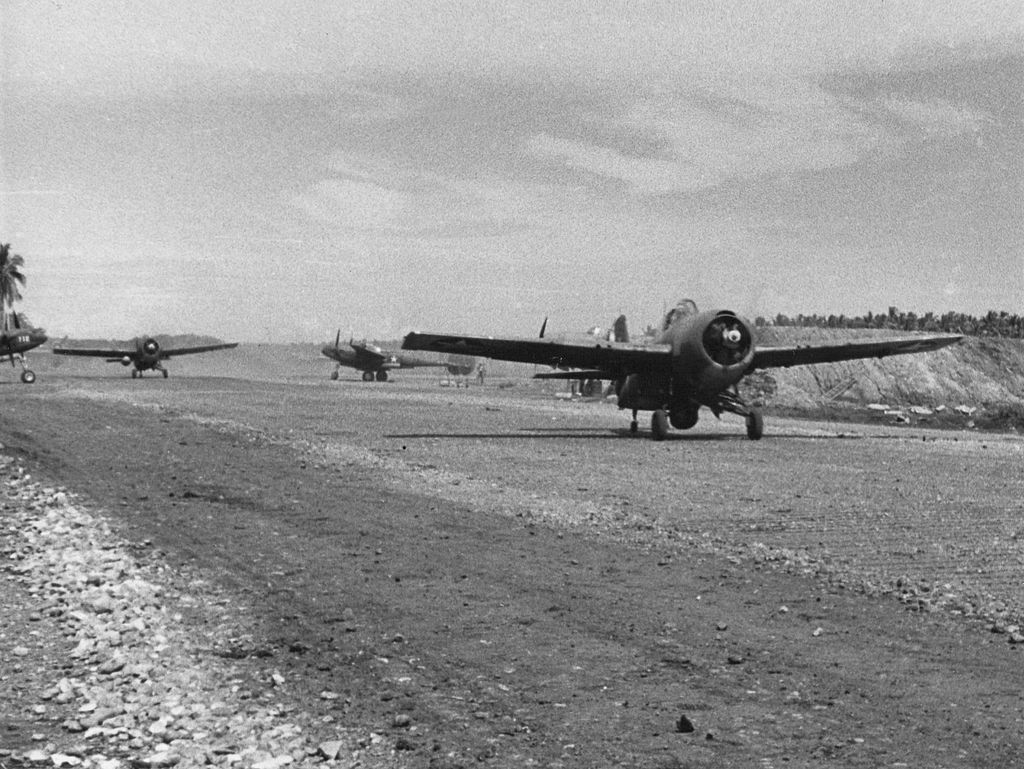 After World War II, the squadron was reactivated in the United States at Naval Air Station Glenview, Illinois where the squadron’s designation was changed to Marine Attack Squadron 121 (VMA-121). During this time they flew a variety of aircraft including the F4U Corsair, F8F Bearcat and A-1 Skyraider.

In mid 1951, VMA-121 received orders to activate its reserve members and departed NAS Glenview for Marine Corps Air Station El Toro, California. After completion of training in the Skyraider, the squadron was transported aboard the carrier USS Sitkoh Bay to Yokosuka, Japan to begin final preparations for a combat deployment to the Republic of Korea. In June 1953 they also set a then Marine record for a single day’s ordnance delivery when 16 AD-2 Skyraiders dropped 156 tons of bombs during the attack on the Sui-ho Dam.

VMA-121 deployed to K-6 Airfield at Pyongtaek, Republic of Korea on October 19th, 1951 and conducted their first strike on October 27. Their mission was to conduct strike missions in support of infantry operations. The squadron dropped more bomb tonnage during the Korean War than any other Navy or Marine Corps squadron, devastating enemy airfields, supply dumps, bridges, and railroad yards. 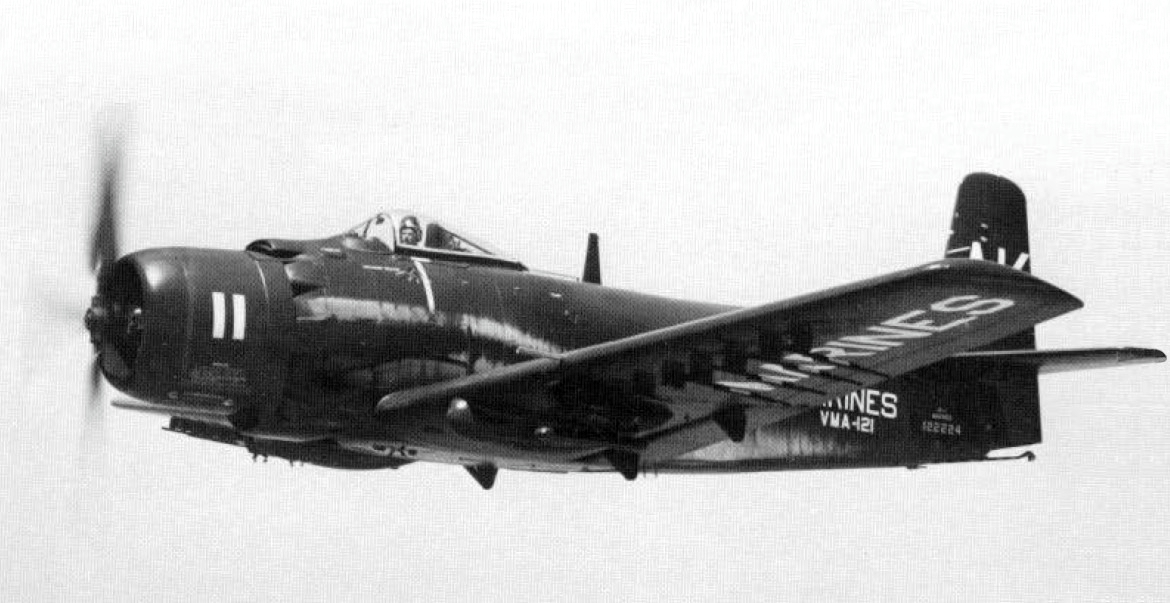 During the Korean War the Squadron insignia depicted Al Capp’s “WolfGirl” from the comic strip Li’l Abner. The “Wolf Raiders” of VMA-121 remained in South Korea for several years after the Korean Armistice Agreement was signed in 1953. Returning to MCAS El Toro in 1957, the squadron assumed its role in the Unit Deployment Program with scheduled rotations to Japan and traded in its AD Skyraider aircraft and joined the jet age with the F9F-8B. The Cougar equipped with the LABS system for loft bombing, was the first aircraft flown by the squadron capable of delivering nuclear weapons.

In late 1958, the Squadron traded the Cougars for brand new A-4 Skyhawks. Spending most of the next year at the likes of NAAS Fallon, MCAS Yuma, and NOTS China Lake, the “Green Knights” became the first squadron to complete the entire special weapons delivery syllabus. During November 1962, the “Green Knights” deployed in their new A-4s to NAS Cecil Field in Jacksonville, Florida in response to the Cuban Missile Crisis. 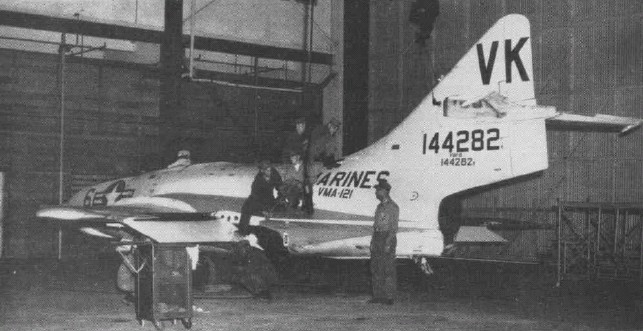 In August 1966, under the command of LtCol Donald Stiver, the Green Knights ferried their A-4E Skyhawks to MCAS Iwakuni, Japan and after preparatory training in Japan and Okinawa, began combat operations from Chu Lai Air Base, South Vietnam in December, 1966. In May 1967 VMA-121 shattered the old ordnance record for Marine Attack Squadrons by delivering over 1750 tons of ordnance in combat operations. After six months of combat operations, the squadron rotated back to MCAS Iwakuni, Japan and Naha Air Base, Okinawa before returning to Chu Lai for another combat tour in September 1967. During the first six months of that deployment, VMA-121 supported 118 major operations.

In early 1969, the squadron was reconstituted at MCAS Cherry Point, North Carolina and newly designated as VMA(AW)-121 to reflect the squadron’s transition to the all-weather attack mission with the Grumman A-6 Intruder. The Green Knights were now capable of acquiring and destroying surface targets in any weather, day or night, with a wide variety of air-to-ground ordnance. The squadron participated in a 13-month deployment to MCAS Iwakuni as a member of 1st MAW. While stationed in Japan, the squadron participated in training exercises at Cubi Point Philippines and Team Sprit in Yechon, Korea. The Green Knights returned to El Toro in June 1978, and the commanding officer was Lt. Col. “WALDO” Adams. 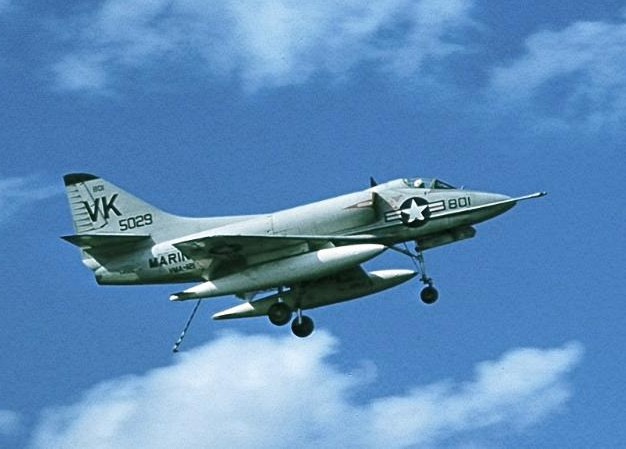 In 1982 the squadron was awarded the Meritorious Unit Commendation (MUC) for achieving 43,000 accident free flight hours. This Commendation spanned from years previously flown in Vietnam without an accident. The award was issued while the squadron was deployed to Iwakuni, Japan and the commanding officer Lt. Col. “JACK” Rippy.

On November 11th, 1985, operational control of VMA(AW)-121 was transferred to Commander, Carrier Airwing Two attached to the USS Ranger. In July 1987, under the command of LtCol. Joe “Java” Weston, the squadron deployed aboard the Ranger on a six-month WestPAC/Indian Ocean cruise. Arriving on Gonzo Station in the North Arabian Sea, the squadron participated in Operation Earnest Will, the escorting of reflagged Kuwaiti tankers.

In February 1989, the squadron once again set sail aboard the Ranger for another WestPAC/Indian Ocean cruise under the command of Pete “NODAC” Jacobs. Upon return to MCAS El Toro in August 1989, operational control of VMA(AW)-121 was transferred back to Commander, 3rd Marine Aircraft Wing (3rd MAW). 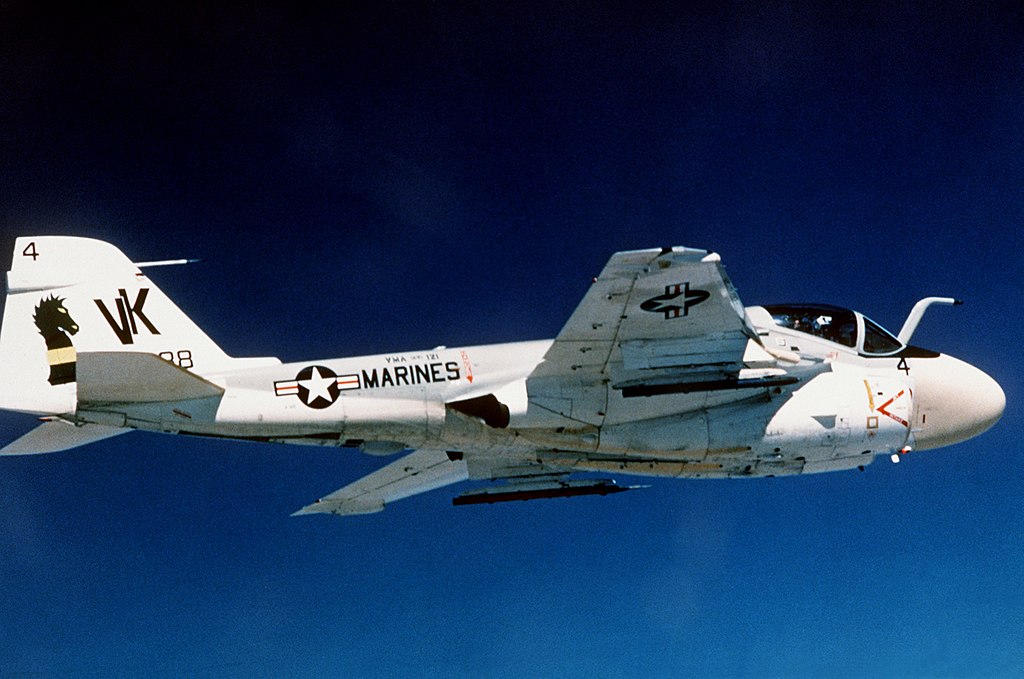 On December 8th, 1989 the squadron was redesignated as Marine Fighter Attack Squadron (All Weather) ONE TWO ONE (VMFA(AW)-121), becoming the first Marine Corps F/A-18D Hornet night attack squadron. Slightly over one year later, the squadron deployed in support of Operation Desert Storm. During the Desert Storm Air Campaign, the squadron flew 557 sorties and 1,655.5 combat hours (more than any other Navy or Marine Corps tactical jet squadron).

Returning to MCAS El Toro following the cessation of hostilities, the Green Knights resumed the unit deployment rotation and relocated to Marine Corps Air Station Miramar, California during August 1994 when custody of that installation was transferred from the Navy (as NAS Miramar) to the Marine Corps pursuant to BRAC action that also closed MCAS El Toro. The Green Knights made three deployments to the Western Pacific before returning to combat over Iraq in March 2000. During this 2000 deployment, the squadron flew 287 sorties in support of Operation Southern Watch (OSW) while based at Ahmad al-Jaber Air Base, Kuwait, providing much-needed operational tempo (OPTEMPO) relief to active duty USAF, Air Force Reserve and Air National Guard A-10 Thunderbolt II fighter squadrons that had been manning the OSW mission at Al Jaber since the end of the first Gulf War.

Global War on Terror and beyond

In April 2002, the squadron deployed with six aircraft to Kyrgyzstan, followed by the remaining six aircraft and personnel a month later. The squadron flew more than 900 combat sorties over Afghanistan in support of Operation Enduring Freedom, returning to MCAS Miramar in October 2002.

Only 3 months after returning from Kyrgyzstan, the Green Knights deployed to Al Jaber Air Base, Kuwait. From February to May 2003, the squadron flew more than 750 combat sorties over Iraq in support of Operation Southern Watch and Operation Iraqi Freedom, and returned to MCAS Miramar on May 12th. 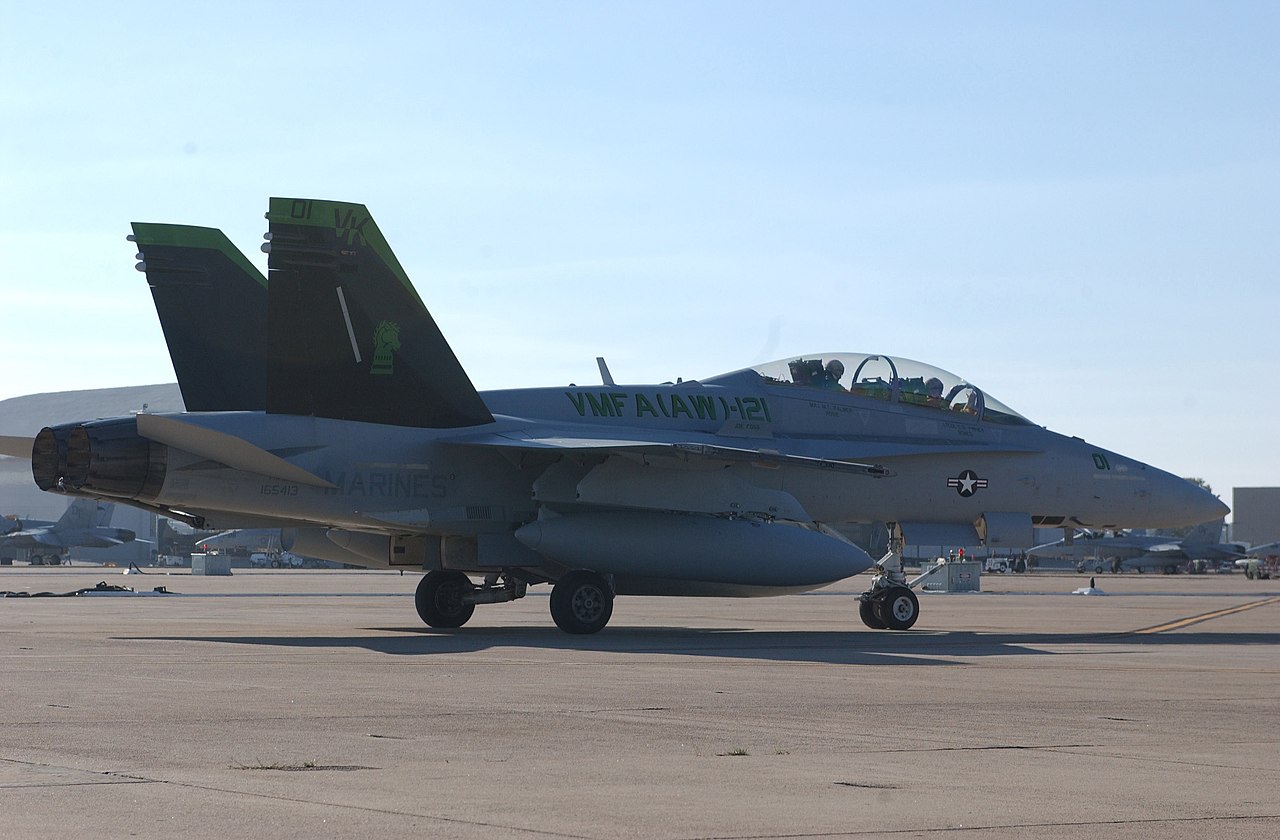 In March 2005, the squadron deployed as part of the Unit Deployment Program to MCAS Iwakuni, Japan. The squadron returned to MCAS Miramar on September 15th, 2005.

In February 2007, the squadron deployed to Al Asad Air Base, Iraq in support of Operation Iraqi Freedom 06-08.

On August 17th, 2011, an F/A-18D from VMFA(AW)-121 crashed into the Pacific Ocean approximately 85 miles southwest of San Diego. Both pilot and WSO ejected safely.

On 28th September 2012, LtCol. Jeff Scott took command of the Green Knights from LtCol. Michael Waterman, marking the end of the F/A-18D Hornet’s tenure in VMFA(AW)-121 and ushering in the fifth-generation stealth fighter era. This change of command officially moved the squadron from MAG-11 at MCAS Miramar to MAG-13 at MCAS Yuma. On 20th November, VMFA(AW)-121 was officially redesignated VMFA-121, accepting delivery of the first three F-35B aircraft becoming the first operational F-35B squadron in the Marine Corps Operating Forces and the first operational F-35 squadron in any service. 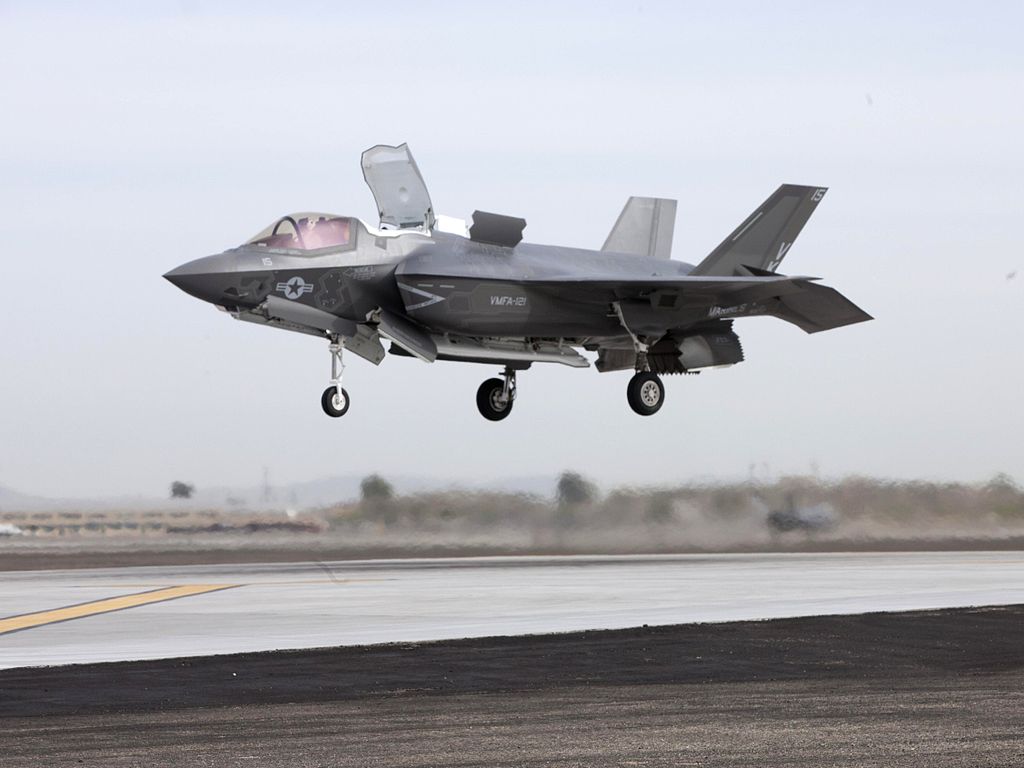 On April 24th, 2018 an F-35B belonging to the squadron made an emergency landing at Fukuoka airport. 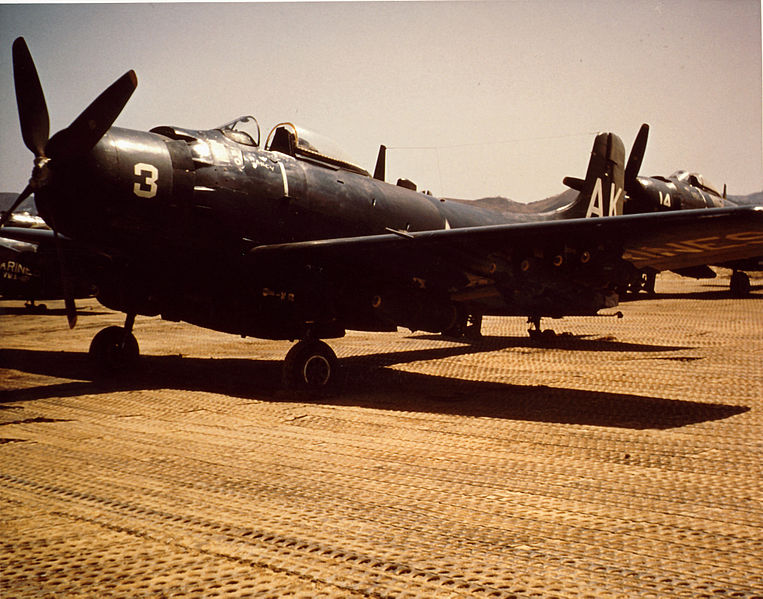 A U.S. Marine Corps Douglas AD-2 Skyraider from Marine attack squadron VMA-121 Green Knights, probably at K-6 airfield at Pyongtaek. VMA-121 flew its first Korean War mission on 19 October 1951, and the last on the day of the ceasefire in 1953.

VMF-121 “Green Knights” was activated in 1941 and renamed VMA-121 in 1951. On October 19, 1951 VMA-121 deployed to Pyongtaek, South Korea where they became the “Wolf Raiders” completing their first mission on the 27th. Their mission was to destroy airfields, supply depots, bridges and railroads and by doing this the squadron dropped more tonnage than any other USN or USMC unit and earned them the nickname “Heavy Haulers”. One of the 125 AD-3s built was BuNo. 122743 21/AK made it through the Korean War but was written off in December 1955.

Check out the latest Korean War model from Hobbymaster. Please click on the image below to go straight to the model page.

out the all latest photos from Hobbymaster that have now been added to the Flying Tigers website. Please click on the images / links below to go to the model page. 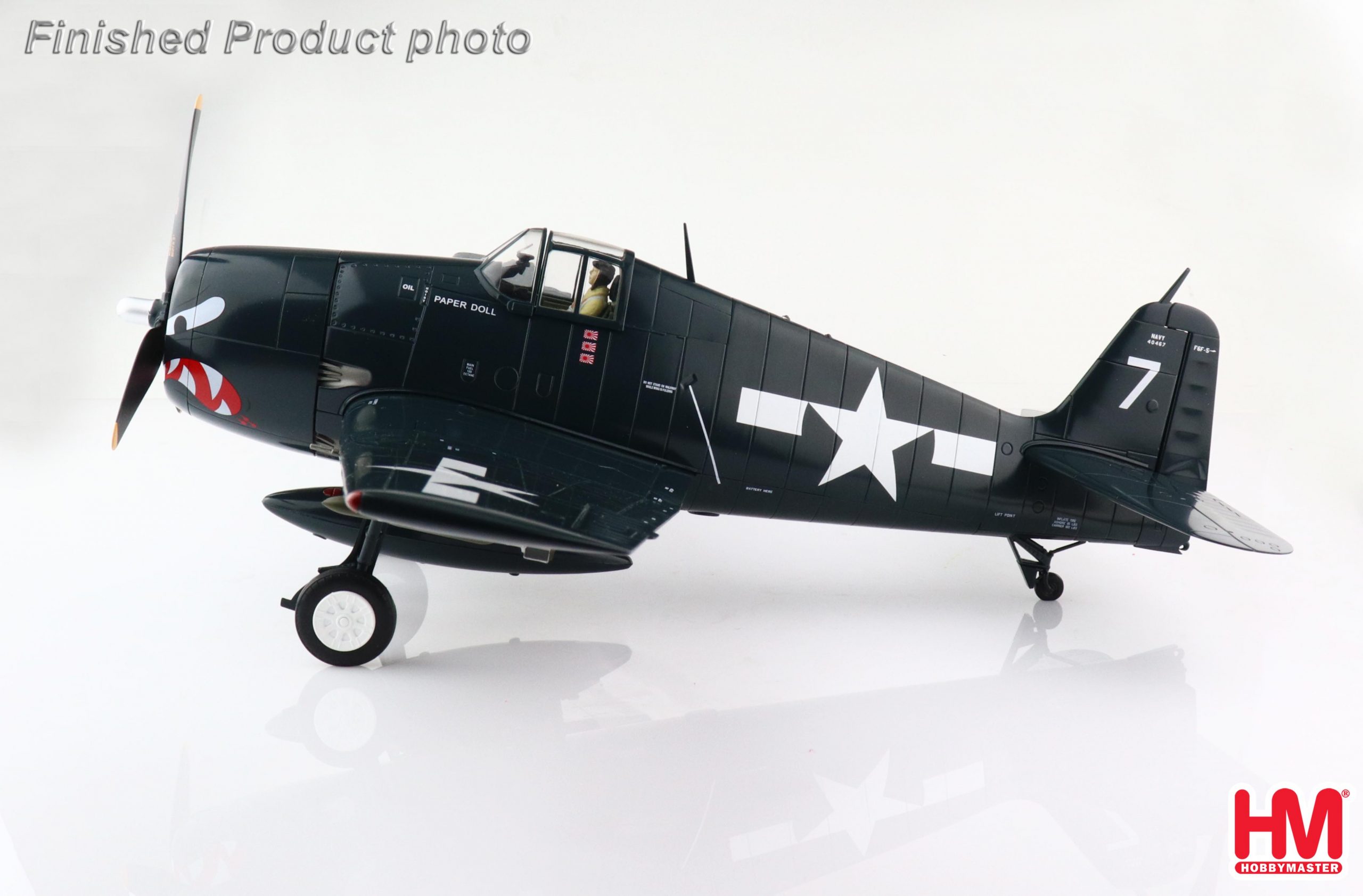 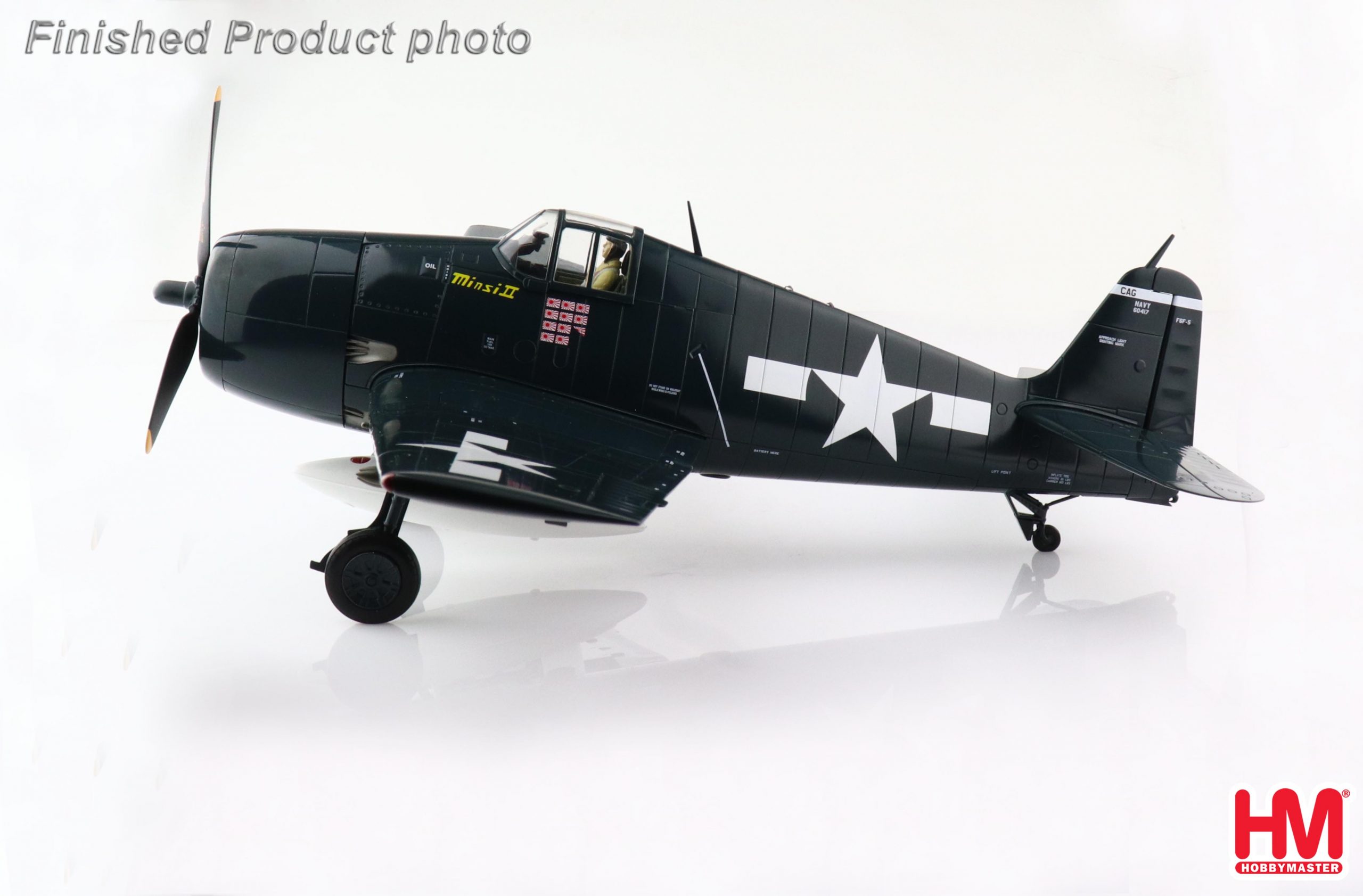 The following model has just arrived at Flying Tigers . Pre-ordered models will be dispatched in the next couple of days. Please click on the images/ link below to order yours now. 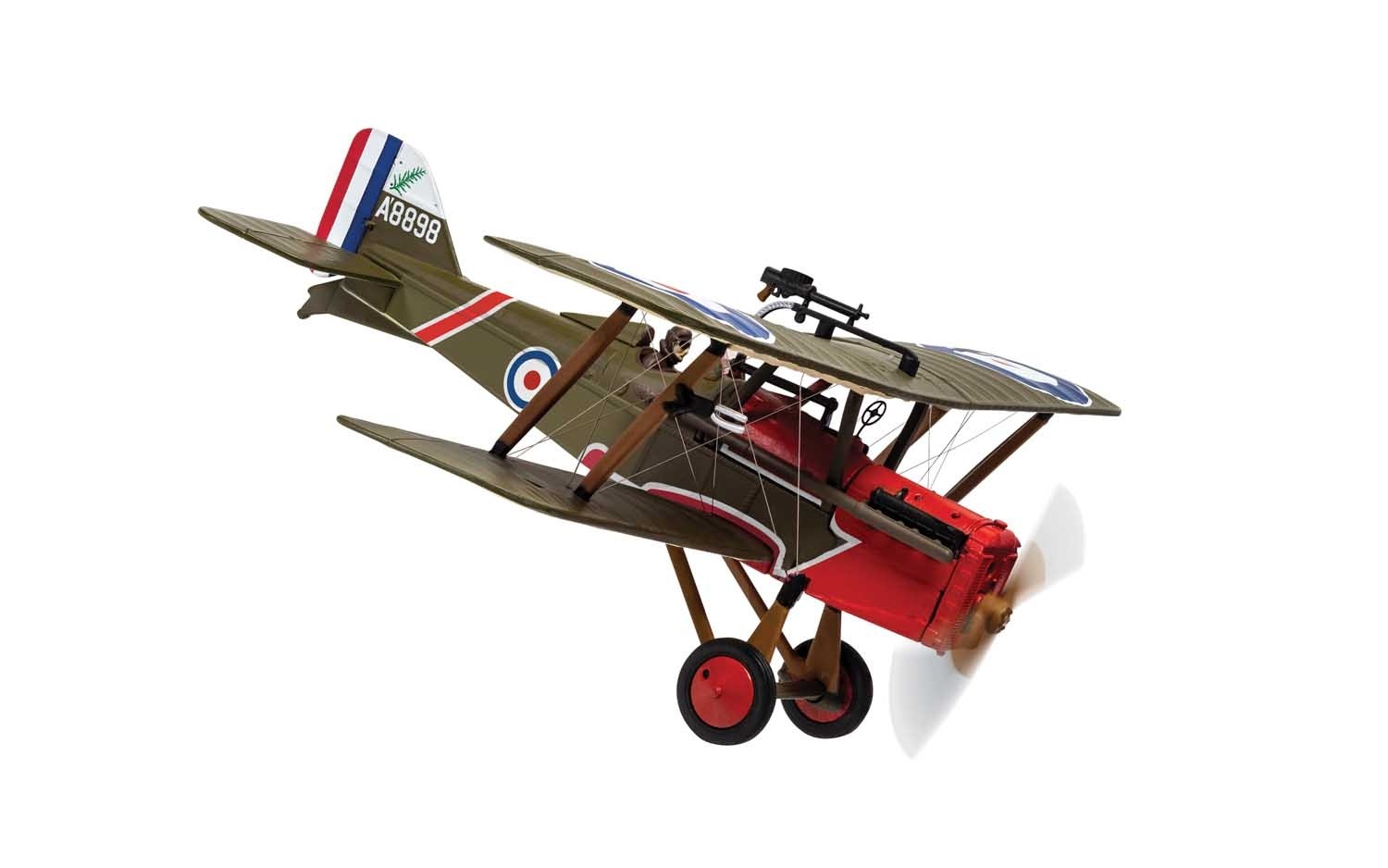 SE5a A8898, the personal aircraft of Captain Albert Ball VC, No.56 Squadron Royal Flying Corps, Vert Galant Aerodrome, Amiens, France, 5th May 1917 – Final victory in an SE5a At a time when Britain was suffering horrendous losses on the Western Front and the nation was in desperate need of a hero, they found what they needed in a handsome young fighter pilot from Nottingham named Albert Ball. Fiercely patriotic and desperate to do his duty, Ball had displayed both bravery and real flying skill in amassing an impressive victory tally in a relatively short period of combat and by September 1916, he had at least 31 victories to his name, making him Britain’s most successful flying ace. The majority of his victories were scored whilst flying the nimble Nieuport Scout and when he was forced to exchange this for the new, but heavier Royal Aircraft Factory SE5 on joining the elite No.56 Squadron RFC, he was initially less than impressed.

He soon came to appreciate the rugged and heavily armed new fighter, as it was more than a match for the latest German Albatros D.IIIs he was now facing in combat. During a period of combat inactivity due to bad weather, 56 Squadron ground crews painted several of their SE5 fighters in flamboyant schemes, reportedly in response to the colourful German aircraft which were opposing their pilots. This unusual embellishment would prove to be relatively short lived, as higher authority took a dim view of the practice and ordered the markings removed immediately.