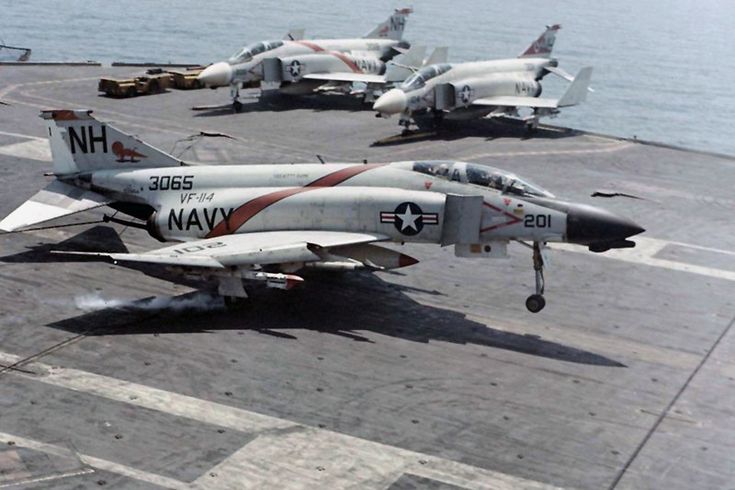 Fighter Squadron 114 (VF-114) was a fighter squadron of the United States Navy that was active from 1945 through 1993. Nicknamed the “Aardvarks”, it was based out of Naval Air Station Miramar, California. The squadron flew combat missions during the Korean War and Vietnam War. VF-114 was disestablished as part of the post-Cold War drawdown of forces on April 30th, 1993.

VF-114 was established as Bombing Fighter Squadron (VBF-19) on January 20th, 1945 at NAS Alameda, California. Soon thereafter, VBF-19 moved to NAS North Island, California, where it first flew the Grumman F6F Hellcat and then the Vought F4U-4 Corsair. As with many squadrons after World War II, VBF-19 made several designation changes. The first change was two years later, on 24th August 1948 when it became VF-192, and its final change was on 15th February 1950 when it became VF-114. At this time, VF-114 was known as the Executioners. 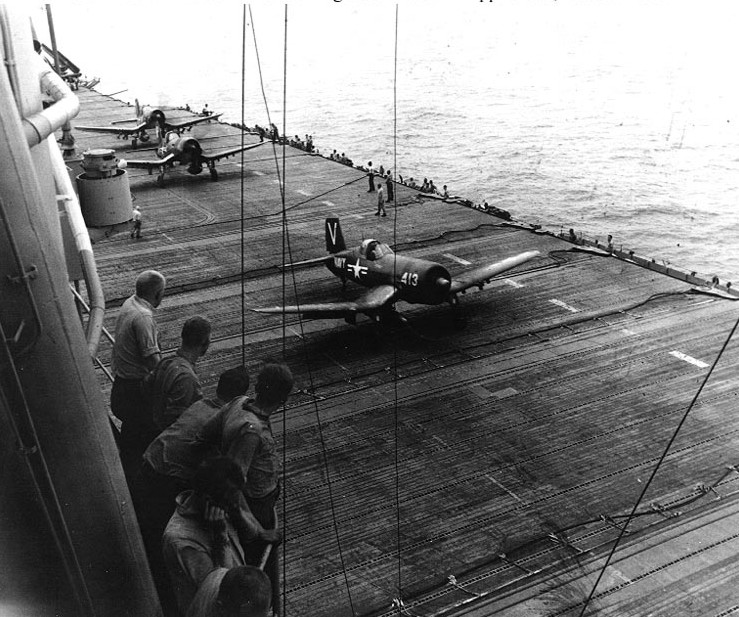 VF-114 participated in the Korean War deployed on the USS Philippine Sea on July 5th, 1950. It flew its Corsairs for several months and conducted over 1,100 strikes against North Korean and Chinese forces.

After its return from Korea, VF-114 moved from propeller aircraft to jets, first flying the Grumman F9F Panther. This was soon followed by the McDonnell F2H Banshee and in 1957 VF-114 transitioned to the McDonnell F3H Demon, the first jet operated by the squadron able to carry air-to-air missiles. Now based at NAS Miramar, California, VF-114 made two cruises on USS Shangri-La and one on USS Hancock. 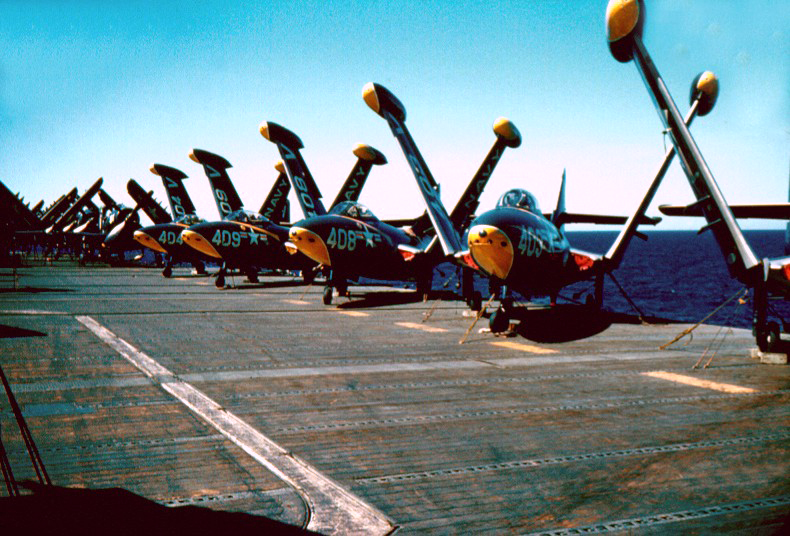 In 1961, VF-114 transitioned to the McDonnell Douglas F-4 Phantom II, becoming the first deployable Pacific Fleet fighter squadron to do so. At this point, VF-114 also changed its name and insignia to an Aardvark, apparently inspired by the resemblance between the F-4 and the cartoon character Aardvark in the “B.C.” comic strip. This change became official in 1963.

At some point the squadron had a 2-foot replica of “B.C.” comic’s aardvark created, which was named “Zott” (for the sound the aardvark made in the comic) and proudly displayed in the squadron’s ready room afloat and ashore. Zott was also said to be the squadron’s “Watchvark,” guarding against intruders from other squadrons. 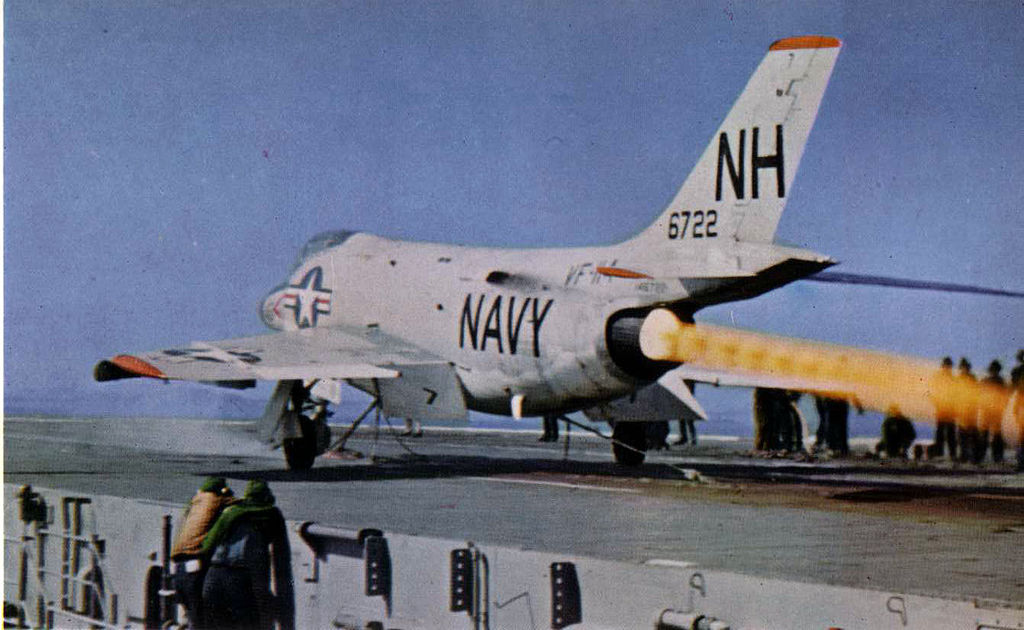 Between 1963 and 1975, VF-114 made nine cruises to Vietnam and the Western Pacific, all aboard the USS Kitty Hawk as follows: 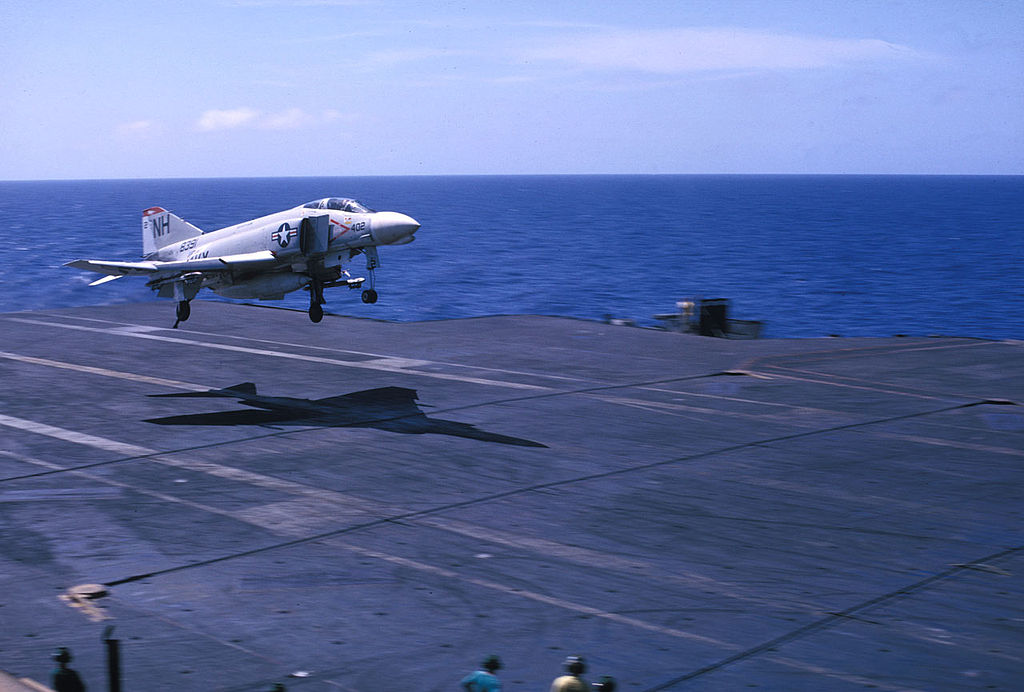 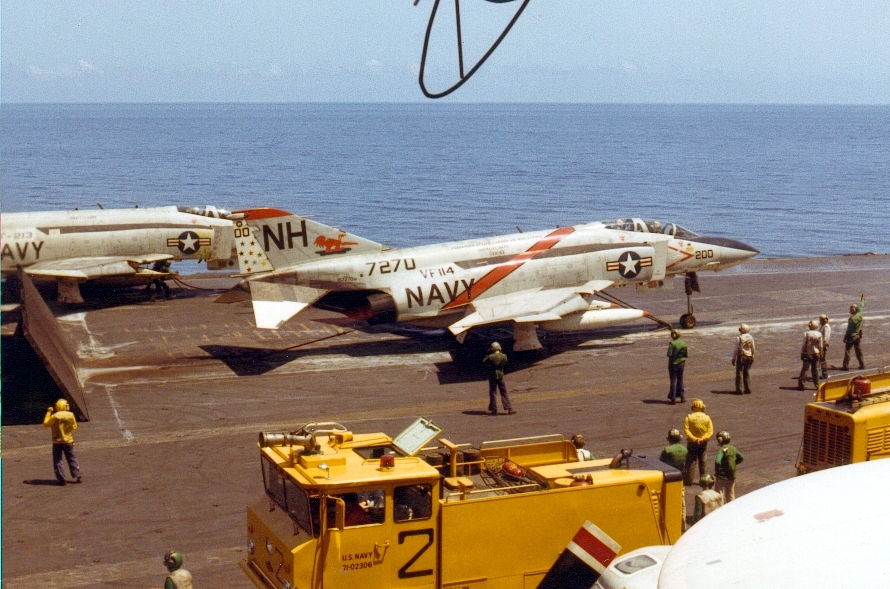 From 17th February to 20th November 1972. On 14th April F-4J BuNo 157252 was hit by antiaircraft fire over South Vietnam, the pilot LTJG J Greenleaf was killed in action, body not recovered, while the remains of the Radar Intercept Officer LT C McKinney were identified in August 1985. On 6th May, squadron aircraft shot down 2 VPAF MiG-21s with AIM-9s.  On 16th August F-4J BuNo 157262 was hit by an SA-2, both crewmen CDR J Pitzen and LT O Pender were killed and their remains were identified in November 1994.

On 15th December 1975, VF-114 transitioned to the Grumman F-14 Tomcat along with its sister squadron VF-213. This transition took a little more than a year and in October 1977 the squadron deployed with its F-14s for the first time, once again to the Western Pacific on the USS Kitty Hawk with CVW-11 and VF-213.

In March 1979, CVW-11 deployed aboard the USS America in a Mediterranean cruise, which was something of an oddity for a west coast-based carrier air wing, and a second cruise followed in 1981. On both these deployments VF-114 captured the Golden Tailhook award, which is given to the squadron that has the highest landing score for a cruise. VF-114 also won the west coast “High Noon” aerial gunnery competition and the “Mutha” trophy in 1982, which signified it as the best Pacific Fleet squadron.

After its two Mediterranean cruises, VF-114 returned to the Pacific Fleet in September 1982 aboard the USS Enterprise. During this cruise, VF-114 participated in one of the largest naval exercises since World War II when it joined up with the carrier groups of USS Midway and USS Coral Sea in the Northern Pacific for two weeks. After its return to NAS Miramar, VF-114 once again won the “High Noon” and “Mutha” trophies, the first time that an F-14 squadron had won both these awards two years in a row.

The squadron returned to sea on May 30th, 1984 under the leadership of CDR Lyle “Ho Chi” Bien and returned home on December 20. During the cruise, the squadron and the air wing participated in several exercises, such as the “Rim of the Pacific (RIMPAC) exercise off of Hawaii and exercise Beacon Flash in the northern Philippines. Once again, the Aardvarks took part in yet another Fleet exercise in the Northern Pacific, this time with the carriers USS Midway and USS Carl Vinson. 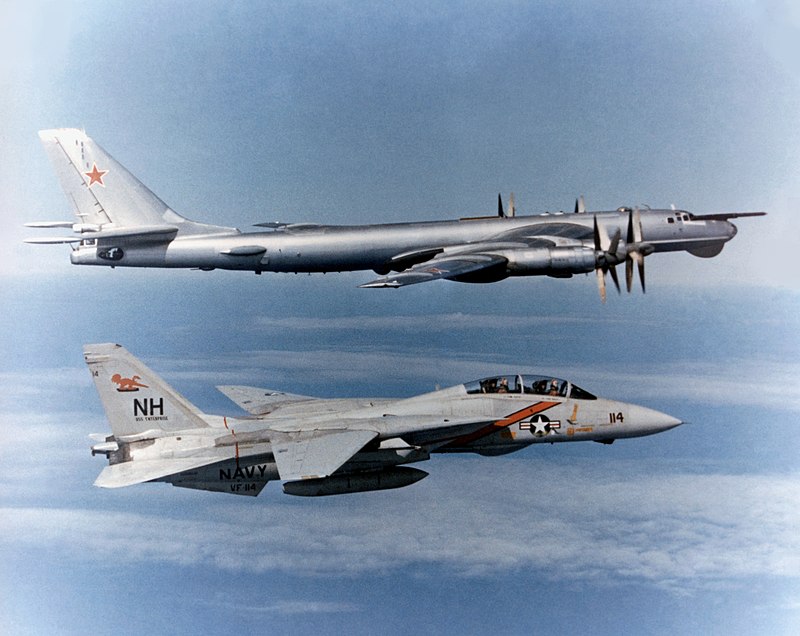 In 1985, VF-114 conducted its Inter-Deployment Training Cycle (IDTC) at NAS Miramar in preparation for its next overseas deployment. During this period, in addition to regular at sea periods in the Southern California (SOCAL) Operational Area, the squadron also conducted extensive air combat training against other Navy squadrons as well as various United States Air Force fighter and United States Marine Corps fighter attack squadrons. On 24th January 1986, under the leadership of CDR Pat “Killa” Kilkenny, the squadron’s next overseas deployment began on board USS Enterprise which ventured out to the Western Pacific, including stops at Pearl Harbor and Subic Bay in the Philippines. Continuing into the Indian Ocean, VF-114 often intercepted and shadowed Soviet and Indian aircraft. During this time, with operations against Libya by the National Command Authority taking center stage, the decision was made to move the Enterprise carrier battle group to the Mediterranean Sea. To do this, the battle group transited through the Suez Canal, making USS Enterprise the first nuclear powered aircraft carrier to do so. Upon arrival in the Gulf of Sidra and in the vicinity of the “Line of Death”, so named by Libyan strongman Muammar al-Gaddafi, CVW-11 fighter and strike fighter aircraft flew combat air patrols for two months, although encounters with Libyan aircraft were rare. The carrier group made subsequent port visits to Naples and Toulon, and instead of returning through the Suez Canal, transited through the Strait of Gibraltar into the Atlantic, and then past the Cape of Good Hope before continuing on to Perth, Australia for another port visit before continuing across the Pacific to its home port at Naval Air Station Alameda.

1987 was devoted to training which included deployments to NAF El Centro, California and NAS Fallon, Nevada. VF-114 again won the “Mutha” trophy and also the Naval Air Force Pacific Fleet Battle “E” battle efficiency award as the top F-14 squadron in the Pacific Fleet. In January 1988, the squadron’s next cruise began, a portion of which was spent in the Persian Gulf escorting reflagged tankers through March, April and May due to the ongoing tanker war. In April 1988, VF-114 participated in Operation Praying Mantis. By February 1989, the carrier had returned to port and VF-114 began a compressed turnaround schedule, due to its next cruise beginning in September 1989. Even with the restricted time period, VF-114 was able to fit in significant training, deploying to NAF El Centro for FFARP (Fleet Fighter ACM Readiness Program) and as part of the air wing to NAS Fallon. Once on board the USS Enterprise, an around-the-world cruise began as the battle group took part in exercises around the globe concurrent with the Enterprise’s transfer from the Pacific Fleet to the Atlantic Fleet and new homeport in Norfolk, Virginia. October saw VF-114 set a new flight record for an F-14 squadron, logging more than 811 hours in a single month. The end of this cruise saw the end of CVW-11’s long attachment to the USS Enterprise, for its next cruise was to be on the Pacific Fleet’s newest carrier, the USS Abraham Lincoln.

VF-114 arrived on board the USS Abraham Lincoln on September 25th, 1990, while she was making her maiden voyage from Norfolk to Alameda, due to become her new home. The trip took six weeks and saw the carrier cruise round the tip of South America, arriving at her new home in late November 1990. The first long-term deployment on Lincoln began in the middle of 1991, during the early part of the cruise the carrier and air wing were involved in the evacuation of thousands of military personnel and dependents from the Philippine Islands in the wake of the Mount Pinatubo eruption. Once this was complete the Lincoln headed for the Persian Gulf.

Although the initial plans had been for the Lincoln to be among the first relief carriers for those involved in Operation ‘Desert Storm’, by the time of her arrival the conflict was over and VF-114, along with the rest of CVW-11, was redirected to conduct post-ceasefire combat air patrols.

That is all for this week.
Thank you for reading this week’s Newsletter.