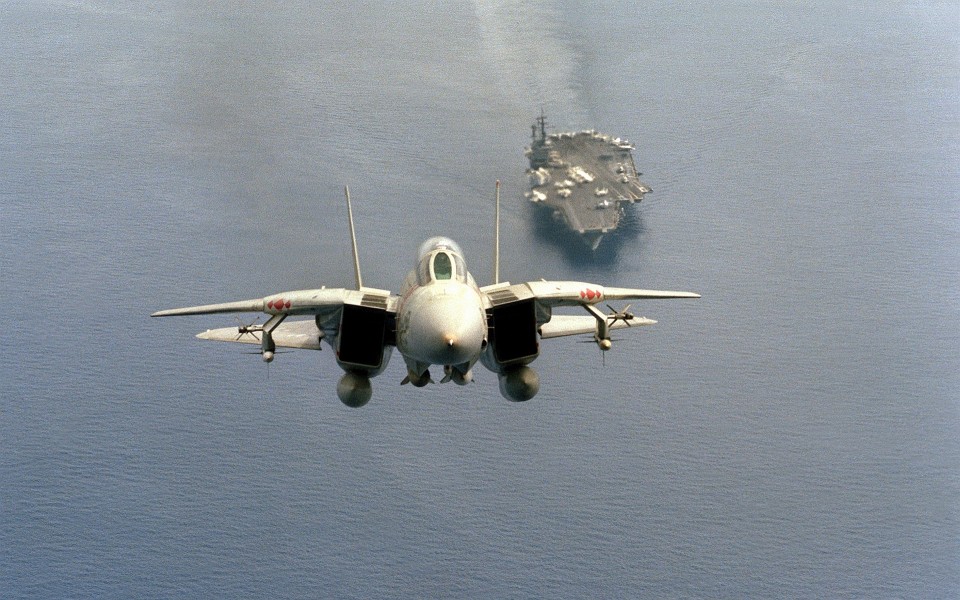 The Grumman F-14 Tomcat is a supersonic, twin-engine, two-seat, variable-sweep wing fighter aircraft. The Tomcat was developed for the United States Navy’s Naval Fighter Experimental (VFX) program following the collapse of the F-111B project. The F-14 was the first of the American teen-series fighters, which were designed incorporating the experience of air combat against MiG fighters during the Vietnam War. 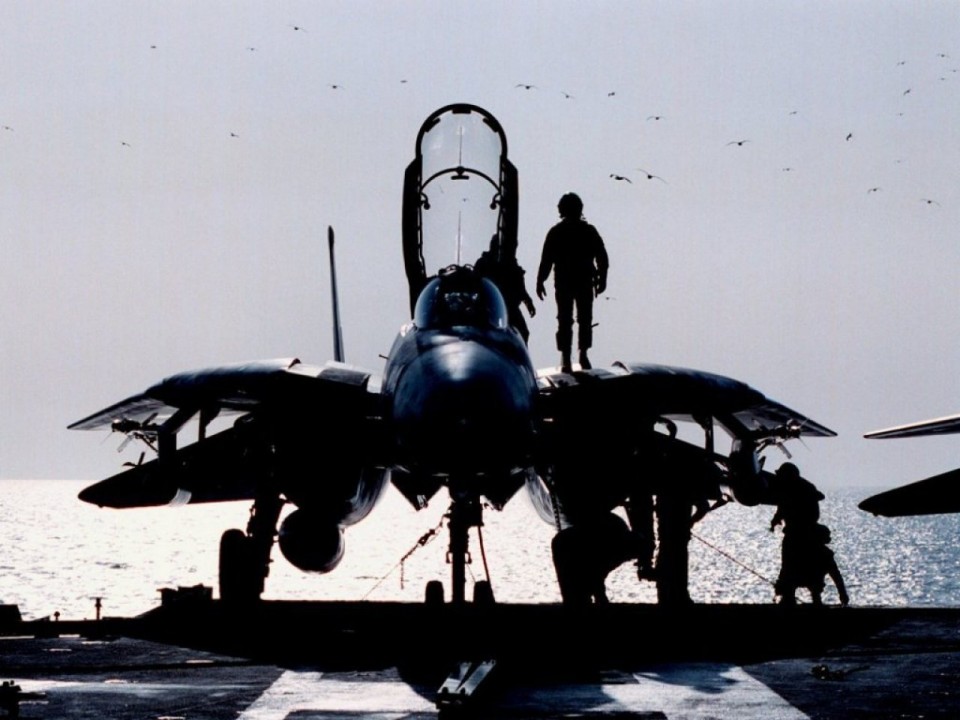 The F-14 first flew in December 1970 and made its first deployment in 1974 with the U.S. Navy aboard USS Enterprise (CVN-65), replacing the McDonnell Douglas F-4 Phantom II. The F-14 served as the U.S. Navy’s primary maritime air superiority fighter, fleet defence interceptor and tactical aerial reconnaissance platform. In the 1990s, it added the Low Altitude Navigation and Targeting Infrared for Night (LANTIRN) pod system and began performing precision ground-attack missions. 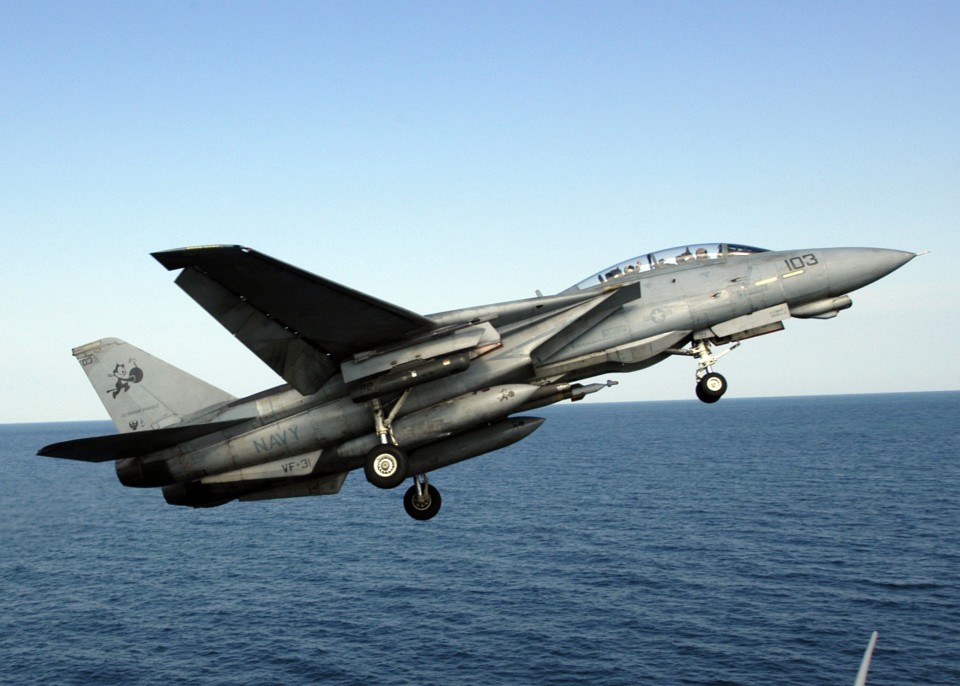 The F-14 Tomcat was designed as both an air superiority fighter and a long-range naval interceptor. The F-14 has a two-seat cockpit with a bubble canopy that affords all-round visibility. It features variable geometry wings that swing automatically during flight. For high-speed intercept, they are swept back and they swing forward for lower speed flight. It was designed to improve on the F-4 Phantom’s air combat performance in most respects. 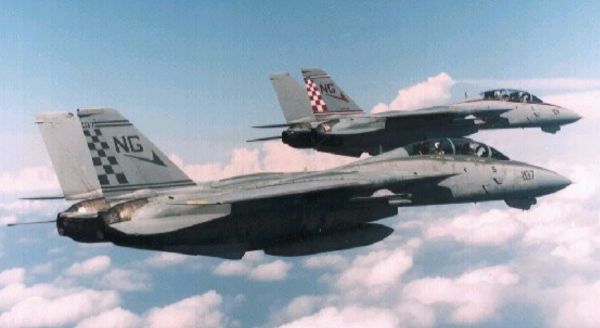 The F-14’s fuselage and wings allow it to climb faster than the F-4, while the twin-tail arrangement offers better stability. The F-14 is equipped with an internal 20 mm M61 Vulcan Gatling cannon mounted on the left side (unlike the Phantom, which was not equipped with an internal gun in the US Navy), and can carry AIM-54 Phoenix, AIM-7 Sparrow, and AIM-9 Sidewinder anti-aircraft missiles. The twin engines are housed in widely spaced nacelles. The flat area of the fuselage between the nacelles is used to contain fuel and avionics systems, such as the wing-sweep mechanism and flight controls, as well as weaponry. By itself, the fuselage provides approximately 40 to 60 percent of the F-14’s aerodynamic lifting surface depending on the wing sweep position. 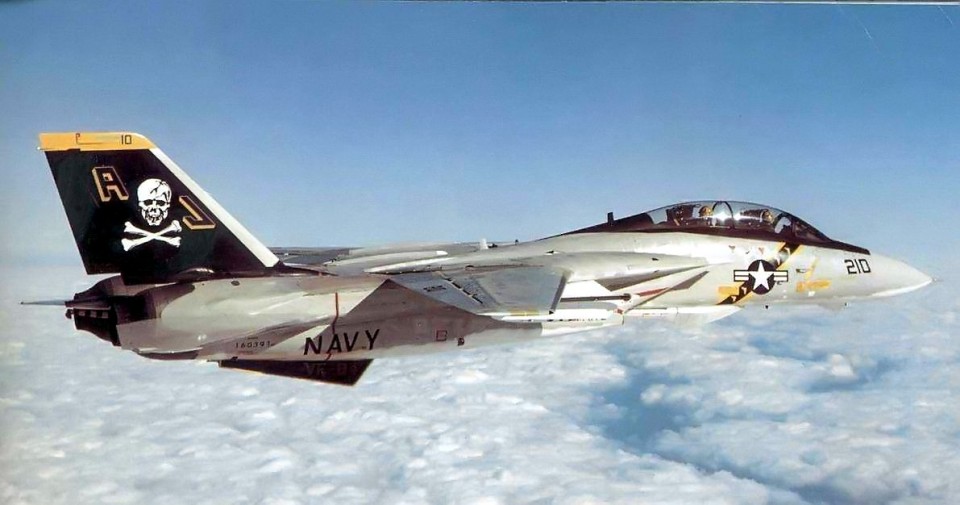 The F-14 began replacing the F-4 Phantom II in U.S. Navy service starting in September 1974 with squadrons VF-1 “Wolfpack” and VF-2 “Bounty Hunters” aboard USS Enterprise (CVN-65) and participated in the American withdrawal from Saigon. The F-14 had its first kills in U.S. Navy service on 19 August 1981 over the Gulf of Sidra in what is known as the Gulf of Sidra incident. In that engagement two F-14s from VF-41 Black Aces were engaged by two Libyan Su-22 “Fitters”. The F-14s evaded the short range heat seeking AA-2 “Atoll” missile and returned fire, downing both Libyan aircraft. U.S. Navy F-14s once again were pitted against Libyan aircraft on 4 January 1989, when two F-14s from VF-32 shot down two Libyan MiG-23 “Floggers” over the Gulf of Sidra in a second Gulf of Sidra incident. 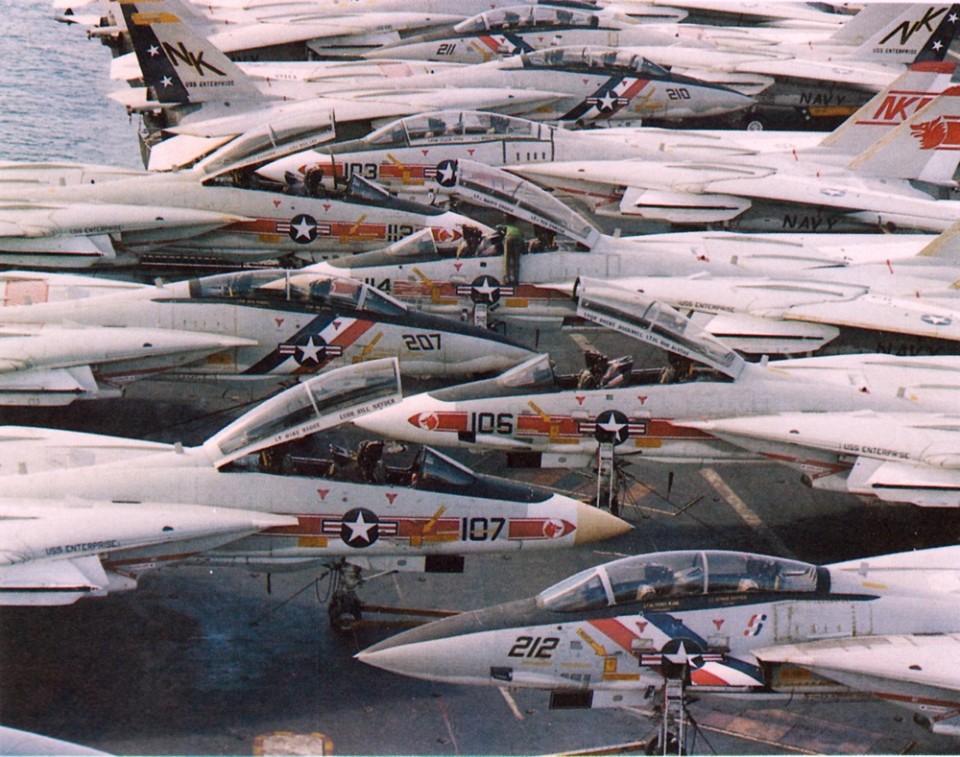 Its first sustained combat use was as a photo reconnaissance platform. The Tomcat was selected to inherit the reconnaissance mission upon departure of the dedicated RA-5C Vigilante and RF-8G Crusaders from the fleet. A large pod called the Tactical Airborne Reconnaissance Pod System (TARPS) was developed and fielded on the Tomcat in 1981. With the retirement of the last RF-8G Crusaders in 1982, TARPS F-14s became the U.S. Navy’s primary tactical reconnaissance system. One of two Tomcat squadrons per air wing was designated as a TARPS unit and received 3 TARPS capable aircraft and training for 4 TARPS aircrews. 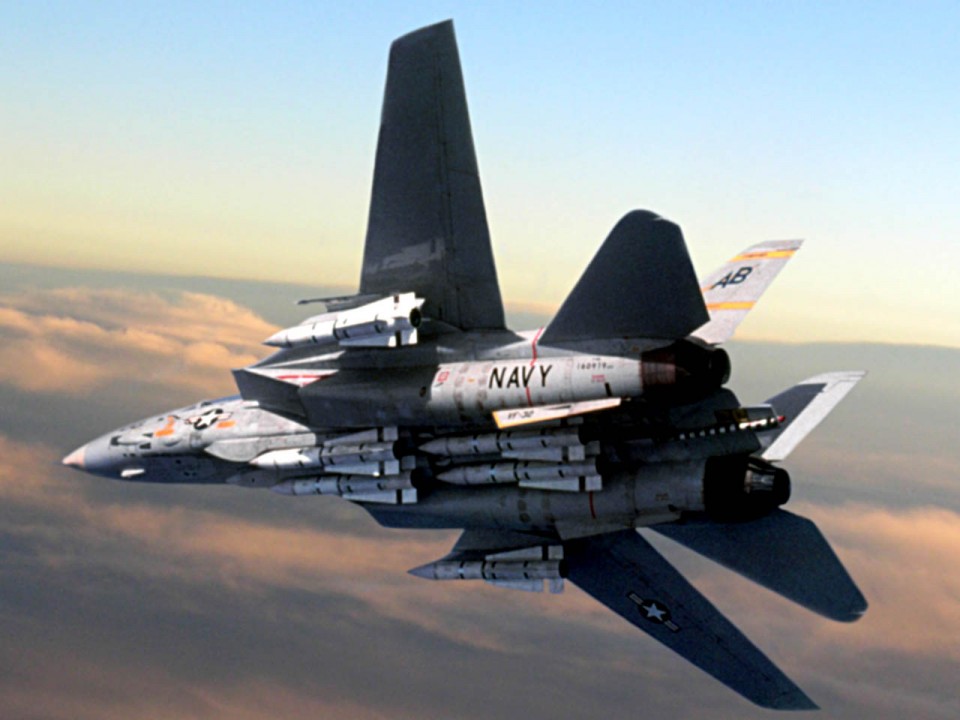 While the Tomcat was being used by Iran in combat against Iraq in its intended air superiority mission in the early 1980s, the U.S. Navy found itself flying regular daily combat missions over Lebanon to photograph activity in the Bekaa Valley. At the time, the Tomcat had been thought too large and vulnerable to be used over land, but the need for imagery was so great that Tomcat aircrews developed high speed medium altitude tactics to deal with considerable AAA and SA-7 SAM threat in the Bekaa area. The first exposure of a Navy Tomcat to a SA-2 missile was over Somalia in April 1983 when a local battery was unaware of two Tomcats scheduled for a TARPS mission in prelude to an upcoming international exercise in vicinity of Berbera. 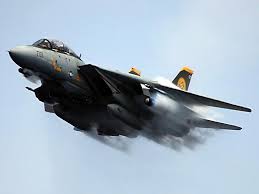 An SA-2 was fired at the second Tomcat while conducting 10,000-ft mapping profile at max conserve setting. The Tomcat aircrews spotted the missile launch and dove for the deck thereby evading it without damage. The unexpected demand for combat TARPS laid the way for high altitude sensors such as the KA-93 36 in (910 mm) Long Range Optics (LOROP) to be rapidly procured for the Tomcat as well as an Expanded Chaff Adapter (ECA) to be incorporated in an AIM-54 Phoenix Rail. Commercial “Fuzz buster” type radar detectors were also procured and mounted in pairs in the forward cockpit as a stop gap solution to detect SAM radars such as the SA-6. The ultimate solution was an upgrade to the ALR-67 then being developed, but it would not be ready until the advent of the F-14A+ later in 1980s. 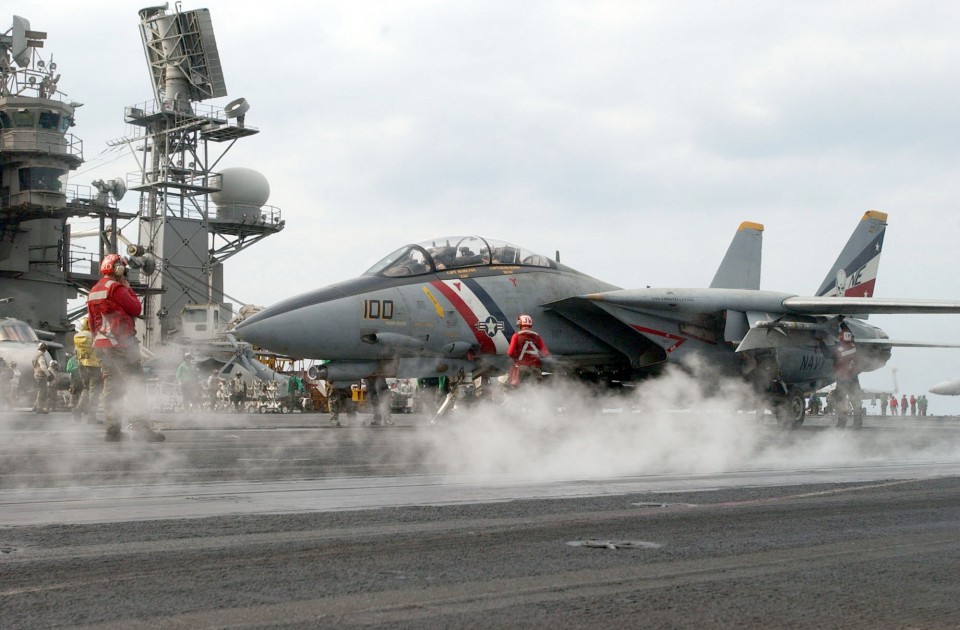 The participation of the F-14 in the 1991 Operation Desert Storm consisted of Combat Air Patrol (CAP) over the Red Sea and Persian Gulf and overland missions consisting of strike escort and reconnaissance. Until the waning days of Desert Storm, in-country air superiority was tasked to USAF F-15 Eagles due to the way the Air Tasking Orders (ATO) delegated primary overland CAP stations to the F-15 Eagle. The governing Rules of Engagement (ROE) also dictated a strict Identification Friend or Foe (IFF) requirement when employing Beyond Visual Range weapons such as the AIM-7 Sparrow and particularly the AIM-54 Phoenix. This hampered the Tomcat from using its most powerful weapon. Furthermore, the powerful emissions from the AWG-9 radar are detectable at great range with a radar warning receiver. Iraqi fighters routinely retreated as soon as the Tomcats “lit them up” with the AWG-9. The U.S. Navy suffered its only F-14 loss from enemy action on 21 January 1991 when BuNo 161430, an F-14A upgraded to an F-14A+, from VF-103 was shot down by an SA-2 surface-to-air missile while on an escort mission near Al Asad airbase in Iraq. Both crew survived ejection with the pilot being rescued by USAF Special Forces and the RIO being captured by Iraqi troops as a POW until the end of the war. The F-14 also achieved its final kill in US service, an Mi-8 “Hip” helicopter, with an AIM-9 Sidewinder. 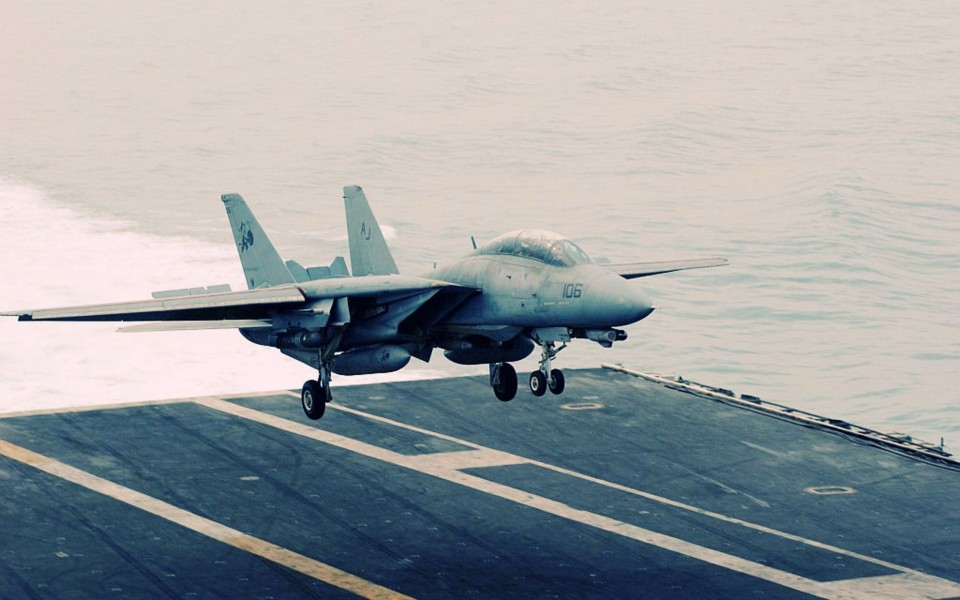 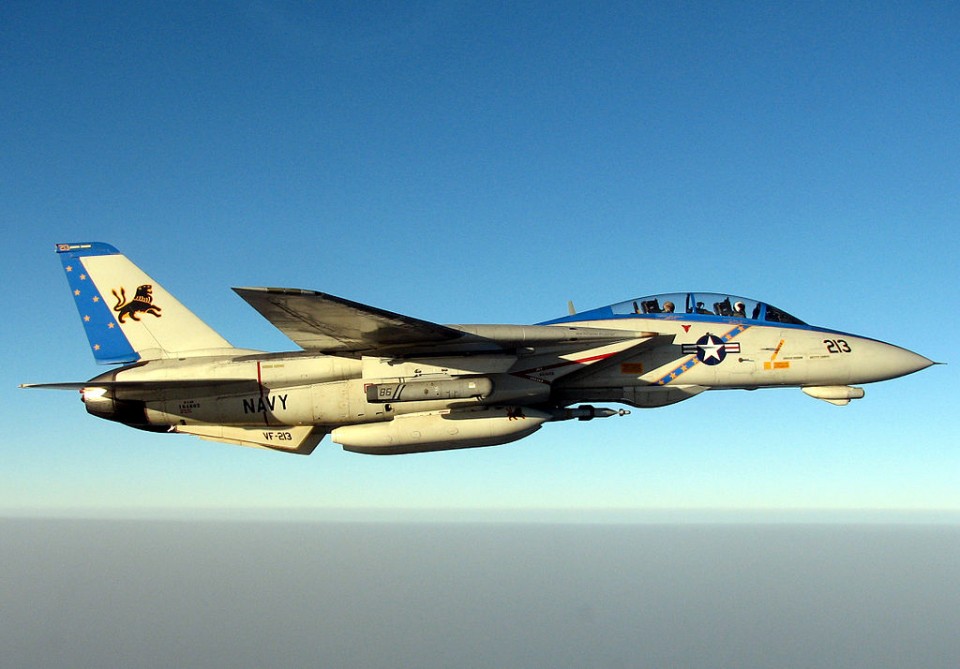 While the F-14 had been developed as a lightweight alternative to the 80,000 lb (36,000 kg) F-111B, the F-14 was still the largest and most expensive fighter of its time. VFAX was revived in the 1970s as a lower cost solution to replacing the Navy and Marine Corps’s fleets of F-4s, and A-7s. VFAX was directed to review the fighters in the USAF Light Weight Fighter competition, which led to the development of the F/A-18 Hornet as roughly a midsize fighter and attack aircraft. In 1994, Congress would reject Grumman proposals to the Navy to upgrade the Tomcat beyond the D model (such as the Super Tomcat 21, the cheaper QuickStrike version, and the more advanced Attack Super Tomcat 21) Instead, the Navy elected to retire the F-14 and chose the F/A-18E/F Super Hornet to fill the roles of fleet defence and strike formerly filled by the F-14. The last two F-14 squadrons, the VF-31 Tomcatters and the VF-213 Black Lions conducted their last fly-in at Naval Air Station Oceana on 10 March 2006. 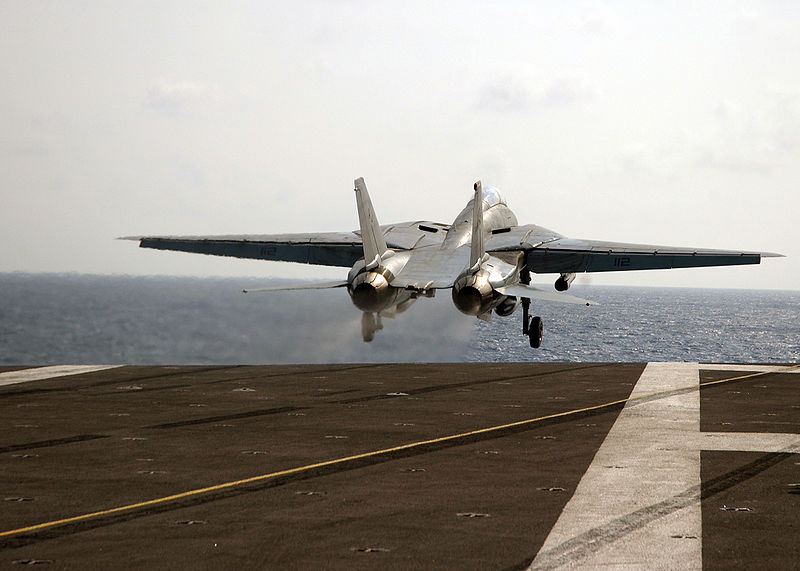 The official final flight retirement ceremony was on 22 September 2006 at Naval Air Station Oceana, and was flown by Lt. Cmdr. Chris Richard and Lt. Mike Petronis as RIO in a backup F-14 after the primary aircraft experienced mechanical problems. The actual last flight of an F-14 in U.S. service took place 4 October 2006, when an F-14D of VF-31 was ferried from NAS Oceana to Republic Airport on Long Island, New York. The remaining intact F-14 aircraft in the U.S. were flown to and stored at the 309th Aerospace Maintenance and Regeneration Group “Boneyard”, at Davis-Monthan Air Force Base, Arizona. 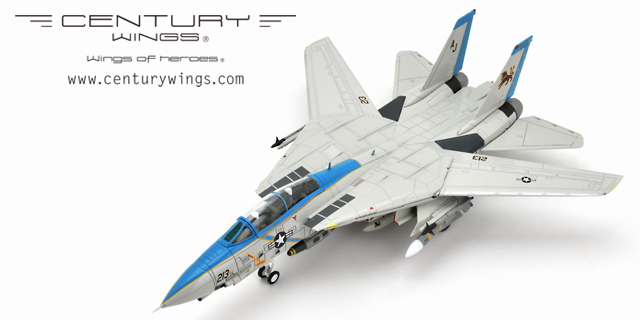 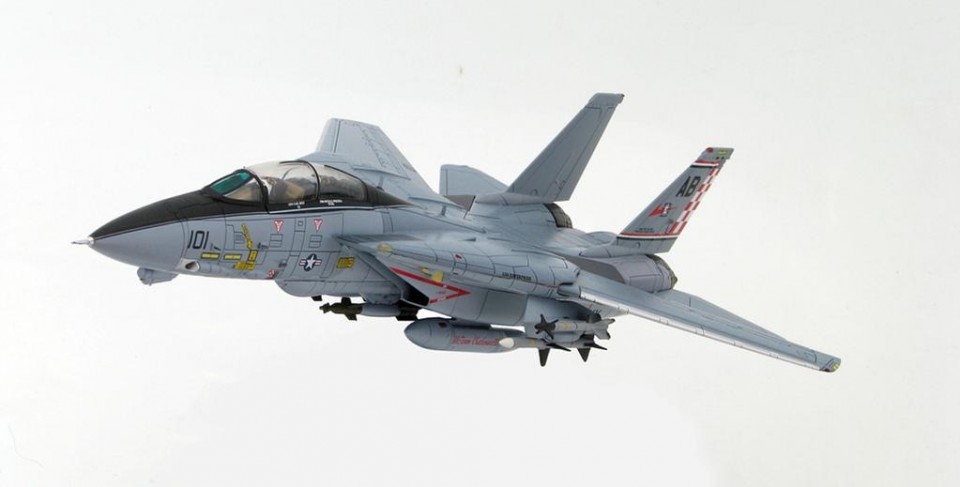 A few things to update you on this week. Firstly for those of you that have pre-ordered the long awaited Century Wings Blackbird release CW001616 , this will be delivered into Flying Tigers and dispatched to you before Christmas. I am sorry but this is completely SOLD OUT at Pre-Order. The same goes for the HA3526 Canadian Hornet in Battle of Britain colours, again this has been completely SOLD OUT at Pre-Order ! I will update you on the latest arrivals as soon as they have “landed” here at Sywell.

The website will be open 24/7 to take your orders over the Christmas and New Year period. Dispatches will resume on Monday the 28th December and again on Monday the 4th of January 2016.

Thank you for taking time out to read this week’s Newsletter.